While hardly orthodox, Steve Bruce’s deferred appointment as manager of Sheffield Wednesday wasn’t a difficult one to understand.

After suffering the heartbreak of losing both his parents within quick succession last year, Bruce took a month off over Christmas to unwind by travelling to Barbados with his wife to watch England play a test cricket match.

He was then hired by Wednesday in early January but given compassionate leave until the start of February for the precise reasons detailed above.

Of course, instant and automatic sympathy would be the standard response. However, having assessed the situation as comprehensively as his keen analytical mind would allow, BBC football expert Danny Murphy steadfastly refused to grant Bruce such namby-pamby leeway.

While providing punditry for Sunday’s FA Cup tie against Chelsea at Stamford Bridge, Murphy was asked for his thoughts on The Owls’ decision to hire Bruce and then allow his assistants to oversee the team for the first month of his tenure.

The ensuing take was typically monotonous:

The club have to take some blame for allowing him to say ‘I’ll take it but not until then’.

They facilitated that which is wrong. If he starts poorly do you think the Sheffield Wednesday fans are not going to bring this up?

You’re sunning yourself watching the cricket for whatever reason. It’s not something any manager I’ve played under would have done.

Murphy, perched intently on the edge of his seat, chin jutted, brow furrowed, fingers interlaced, the entire world turning grey in the perma-drizzle vortex that surrounds him, went onto posit that Bruce has also “made a rod for his own back” because he used to manager Sheffield United (?).

Ruud Gullit then signalled his agreement with a wry head-nod before adding “If it was Manchester United do you think he (Bruce) would have done the same?” 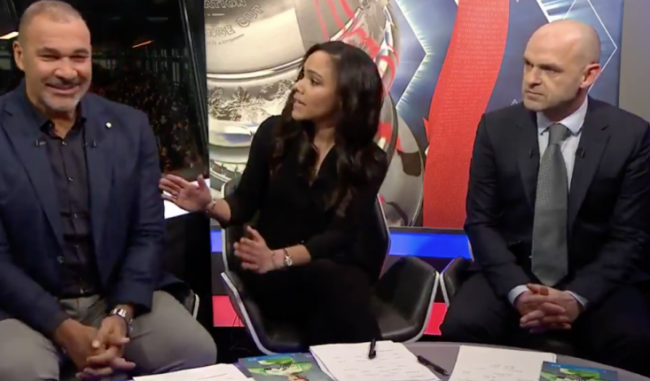 Image: BBC Sport/Match of the Day

At this juncture, it’s probably worth noting that Alex Scott repeatedly tried to angle her male colleagues toward the precise, emotional nature of Bruce’s sabbatical, only to be repeatedly grumbled over by her fellow sages.

Of course, criticism of Murphy’s glum, obnoxious, uninformed opinion was swift and righteous and quite rightly so.

We then reached the point where Bruce’s son, Alex, who plays for Wigan Athletic, was actually forced to defend his dad for taking time off work at the end of one of the most traumatic years of his life.

Maybe if Ruud and Danny had been managing since 1998, lost a father, a mother, a job, had health issues of his own to to cope with all in the space of around six months they and others would understand why he needed a short break from football. https://t.co/FaeXfkSFMJ

The state of football coverage in 2018/19. No joy, no irreverence, no information, no craft – just endless hours of po-faced vacillation. There’s a reason that Pies’ now regularly tune in to live televised matches at kick-off, disappear for 15 minutes in the middle and then turn off as soon as the final whistle sounds. Punditry provides nothing of value, only irritation.

We can only hope that this is the nadir, for fear it may somehow still get worse.