FA Cup final day always stirs up pastoral memories for me to this day. The routine was always the same: football on the rec all morning, home in time for kick-off, back out on the park for 15 minutes at half-time, back in time for the second-half, full-time hotdogs.

You know it really doesn’t get much better than that.

Cantona’s awkward-cum-magisterial winner in ’96, Paul Rideout doing a number on Manchester United the year before, the fabled final that saw my utter disappointment at pulling Roberto Di Matteo’s name out of the “first goalscorer” fruitbowl turned to elation within the space of 42 seconds, landing me with enough in the way of winnings to keep my in Mini Milks for the next couple of weeks…I could on, but I won’t as I’m fairly sure you get the picture. 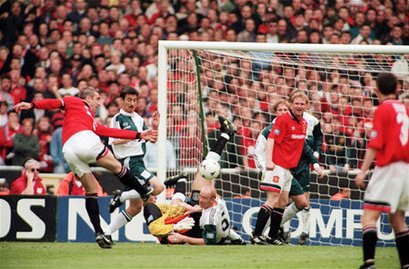 True, the lustre has faded in recent years. Maybe my boyish enthusiasm isn’t what it was, maybe it’s the over-exposure we all fall prey to these days – a cut-and-dry case of footballing overkill.

For whatever reason, the oft-vaunted “magic” of the FA Cup final has withered over time. I still watch it for the exact same reason that I’ll happily sit through Lech Poznan versus Metalist Kharkov on a Thursday night – because it’s one more game that Sky haven’t been able to get thier monopolising mits on – but I, along with a fair number of other neutrals/charlatans, just don’t revere the occasion (or the entire tournament, for that matter) like I did in days gone by. 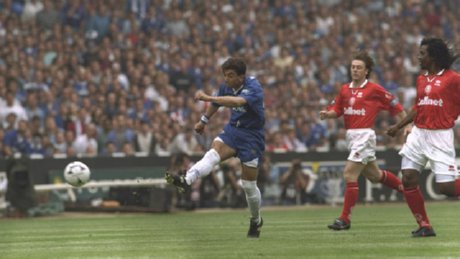 With the final still a week away, you may be wondering what bought on all this misty-eyed nostalgia?

Funnily enough, and here’s not something I’d usually freely admit to, it was an article on the subject which appears in today’s Daily Mail – an article subtly entitled “Magic of FA Cup final has been trampled on by Dance of the Moneybags.”

Stoked by brief quotes from Harry Redknapp and Trevor Brooking, who have both expressed vague slivers of remorse that there are Premier League games on the same day as the final this year and that Manchester United could therefore be crowned title-winners just minutes before Manchester City kick-off against Stoke at Wembley, Mail bigwig Michael Henderson farts into full-on “Princess Diana/Loss Of The English Village Green” mode over the fact that the domestic football scheduling is just one more example of how society is unravelling before our very eyes.

Henderson’s morose diatribe on “the wilful destruction of the FA Cup” even goes as far as including nonsensical nods to Oscar Wilde and TS Eliot’s “Notes Towards The Definition of Culture”, i.e, the ex-pat poet’s list of sepia-hued pursuits (think Henley Regatta, 19th Century Gothic churches, beetroot, etc) that should be cherished in order to preserve the English culture – laminated A3 copies of which are presumably blu-tacked up on the walls of every office at DMGT as a motivational aid to stir their staffer’s cholesterol-clogged uber-Tory hearts, instead of the “Hang On In There” cat.

It’s perhaps also worth mentioning that the article actually includes a large green sidebar towards the bottom that documents the exact reasons for the FA Cup final being played this coming weekend (UEFA won’t let teams play at Wembley in the fortnight before the Champions League final, extra international friendlies have led to a fixture pile-up).

I’ll let that one sink in for a moment. 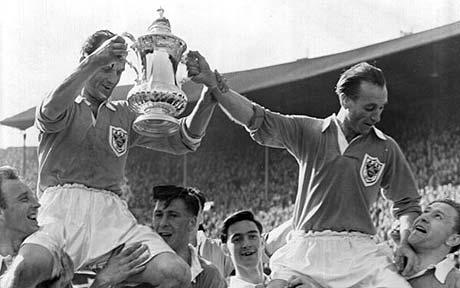 The Mail’s blatherings aside, as far as I can tell the FA Cup final itself is in no danger of losing it’s core appeal (try to stop Man City and Stoke fans revelling in the atmosphere of the day’s festivities come Saturday) and the regard in which it is held by proper, honest-to-goodness football fans isn’t really in too much jeopardy – despite what viewing figures may suggest.

It’s really just a question of preference. Perhaps the perceived loss of the competition’s lustre can be primarily attributed to the fact that, after already sampling seven or eight rounds of mostly bog-standard cup football in the space of a few months, the over-exposed football fans of today aren’t as openly willing to buy into the tired old ‘magic of the cup’ charade that still seems to prevail – the FA Cup is just not as shiny and exciting as many of the other options available.

The FA Cup may well provide a decent rootsy yarn, but it ain’t half as tricksy and dramatic as the Premier League season as worldwide interest will attest to – regardless of how many times the ITV production crew have instructed Adrian Chiles to tell us otherwise. 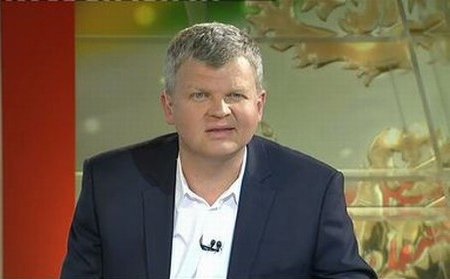 Much as the Mail and their whiny traditionalist counterparts are loathe to admit it, times have changed: Thatcher is as good as mummified, the Union Jack clashes with the sunset and the sport we darned-well gave to the colonies is everywhere.

For many years the FA Cup final was the only football match that was televised live, thus lending it a special air of anticipation and prestige, but now you can watch live-streaming of the Tibetan Amateur League on your smart phone at 2 a.m if you so choose. It’s only natural that allegiances should wane and dissipate once the amount of choice is multiplied by several hundred degrees.

And I really do recommend the Tibetan Amateur League.