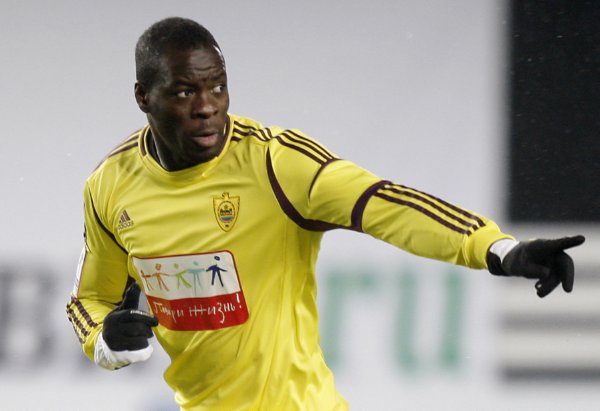 It is being reported that Anzhi centre-half Christopher Samba was given the ol’ Russian Banana Salute (as given to Roberto Carlos and Peter Odemwingie before him) by Lokomotiv Moscow fans during Sunday evening’s game between the two sides.

After a damning photo was published in newspaper Sovetsky Sport yesterday, Anzhi have accused Lokomotiv fans of abusing Samba, calling the taunt ‘idiotic and disappointing’ – indeed, they’ve even set up a dedicated task force to investigate the incident in Moscow.

An Anzhi spokesman said after the game:

“A banana came down at Samba from the VIP section, as the teams were leaving the field. Who threw it is unknown.

“Samba picked up the banana and threw it back. In our opinion this was the best and most appropriate response to those responsible.”

However, Lokomotiv president Olga Smorodskaya is having none of it, claiming that, after viewing inconclusive footage of the abuse, Anzhi may have set up the incident to drag her club’s name through the mire.

“I didn’t see anything. This didn’t happen and couldn’t have happened, I watched how our fans behaved in the stadium. They have provided exemplary support to the team.

“I would like to bring to people’s attention that all these banana stories happen only with one club (Anzhi). Roberto Carlos has had two bananas this year.

“No-one saw anything. If this event actually took place, then it was done surreptitiously. It all looks like a provocation [to make Lokomotiv appear racist]. I don’t know on whose part.

“Of course, if the incident is proven to have occurred we won’t hide anything and we will absolutely punish the guilty.

“We have a lot of dark-skinned players, and have never had anything of this kind.”

Who knows? She may be right, she may be wrong – but, once again, this is the gleeful send-off that a section of the Lokomotiv fans gave Odemwingie (who is, lest we forget, a ‘dark-skinned’ chap) on his final game before departing to West Brom… 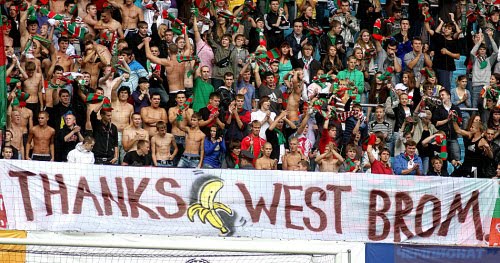 Hardly the most exonerating of images.