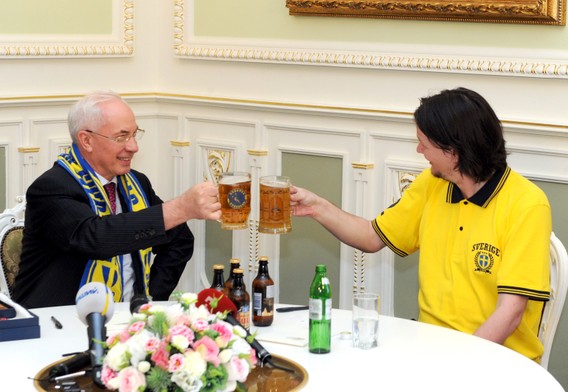 After waging a round of beer on his country beating Ukraine in their opening Euro 2012 game, Sweden fan Ola Sjostedt (who is head of the Sweden Supporters Club) had to make his way to the government offices in Kiev to settle his boozy debts. Why? Because he didn’t just make this bet with any old Tom, Dick and/or Harry – no, no. He made it with Mykola Azarov, the Ukrainian prime minister.

During a visit to the fan park in the capital, Azarov and Sjostedt made the bet on camera, with the loser agreeing to buy the winner a beer depending on the outcome of the game on Monday night. Shevchenko did the business, so Sjostedt was forced to make the trip to Azarov’s offices with a six-pack under his arm.

The pair were then photographed, with Azarov decked out in a Sweden scarf, clinking glasses and supping on the spoils. All well and good you’d assume? Wrong (shamelessly copy-and-pasted from The Guardian):

“With political infighting in Ukraine running at a high pitch, the opposition was quick to pounce. The leading opposition deputy, Mykola Tomenko, in a statement on an opposition party website, reminded the 64-year-old Azarov that drinking alcohol – even weak alcohol – was strictly prohibited on official premises.

“‘It is shameful and inadmissible when the leaders of the country contradict the law and the principles of defending morality by beginning to publicise consumption of strong drink during working hours and on state premises,’ said Tomenko.”

Tomenko then called on the Kiev Police to see that Azarov paid his fine of 85 hryvnias (about £6.50), which is the standard punishment for an ‘administrative offence’. Leave it to politicians to suck any morsel of humour from even the simplest act of goodwill. Boo!

Not that it’s deterred Azarov in the slightest: He’s now challenged any willing France fans to a similar wager, this time putting a bottle of his finest Cognac on the line!