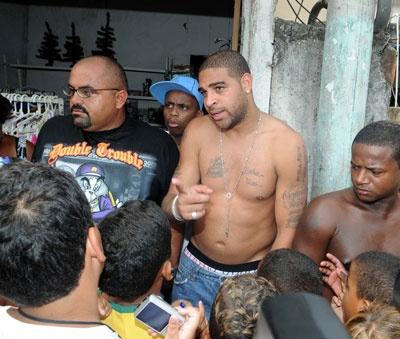 What if we told you one of these men is a professional footballer?

There’s a strangely inevitable air to this, but the big news of the day down Brazil-way is that, having not turned up at a Flamengo training session just 13 days into his latest stint at his boyhood club, new signing Adriano (remember him?) was later found and photographed drinking in the rough-as-arseholes Rio favela of Vila Cruzeiro.

This is the man who, not a week ago, described his move to Flamego as his “last chance” and promised to “endeavour to do things seriously” and make a concerted efforts to play his way back into the Brazilian national side in time for the 2014 World Cup in his home country.

Some of Pies ‘umble thoughts on Adriano’s squandered career can be perused here: Farewell Adriano, We Hardly Knew Ye – such a pitiful waste of cathartic power, bustling skill and barely-bridled aggression.