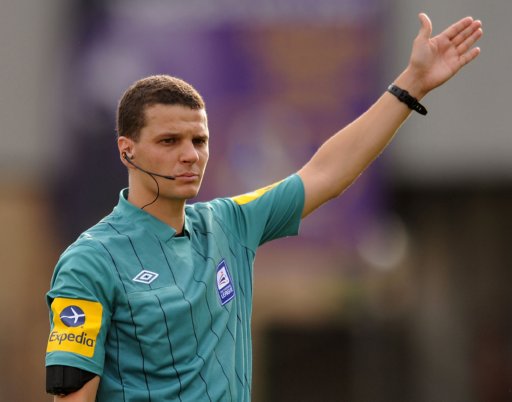 It has emerged that the referee who was due to preside over last night’s Championship fixture between Barnsley and Peterborough was relieved of his duties by the FA after being arrested on Sunday over allegations he hacked into the email account of one of his FA colleagues.

Ref Dean Mohareb, aged 29, was nicked at his home at the weekend by Greater Manchester Police and was formally arrested (and has since been bailed) on suspicion of “gaining unauthorised access to computer material/data and disseminating private information”.

In Layman’s terms, he accessed the emails of a colleague and then passed information he found to the media – things like “Pssst… Howard Webb doesn’t have a single hair on his entire body,” “Pssst… Lee Probert is an android,” and “Pssst… Andre Mariner is in fact The Ancient Mariner’s only living relative”.

The FA have refused to comment on Mohareb’s arrest or his future at this stage, but it’s fairly safe to assume that it won’t lie in professional refereeing if he’s found guilty.