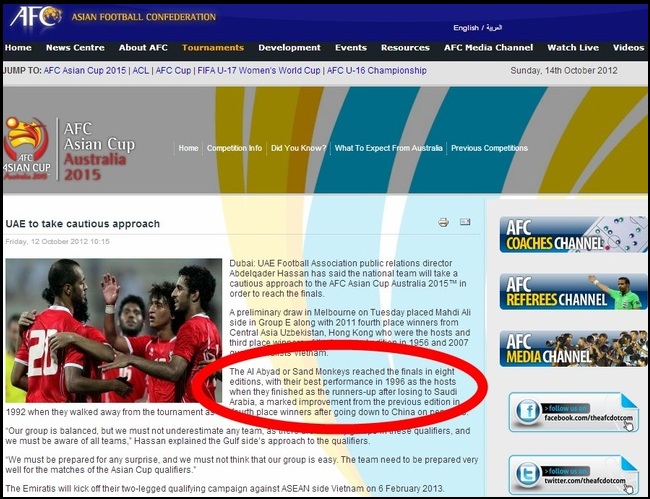 The Asian Football Confederation have been quite rightly forced into apologising after an almighty balls-up on their official website saw an article refer the United Arab Emirates’s national team as the ‘Sand Monkeys’.

The article has since been stripped after Yousuf Abdulla of the UAE Football Association demanded an apology and called the wording an ‘unfortunate affair’ which ‘revealed some racist acts by some AFC officials.’

The AFC have apologised unreservedly,and claimed that a new writer for their site made the mistake after using a insultingly doctored Wikipedia page for reference:

“The AFC apologises for an editorial mistake in which the UAE National Team was inadvertently referred to by an inaccurate nickname on the AFC’s official website in the article ‘UAE to take cautious approach’ dated 12 October 2012.

“The error, which was mainly because of referral to a popular web-based encyclopedia by the concerned Editor, was corrected immediately after it was noticed.

“The AFC would like to apologise for any hurt this might have caused to the UAE Football Association and UAE football fans.”

Oh dear, oh dear. When you can’t trust Wikipedia, just who can you trust?

For the record, UAE’s nickname is actually ‘Al Abyad’ which translates as ‘The White’.