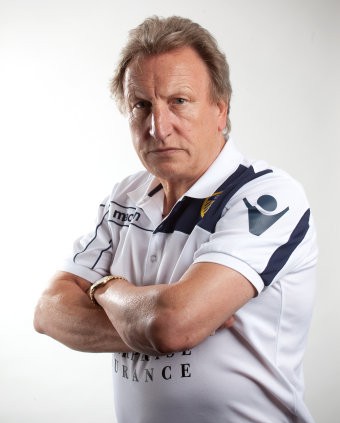 Skip back to last Friday evening. Leeds vs Sheffield Wednesday. Some gibbon charges onto the pitch and strong-arms Wednesday ‘keeper Chris Kirkland in the face, leaving him poleaxed and in need of treatment. After the game, Leeds manager Neil Warnock told the press that he thought Kirkland ‘went down easy’.

At the time, it seemed like Warnock was pulling his usual antagonistic guff, riling all and sundry as he’s spent his entire career doing. Not so, it would appear, as the man himself has used his column in the Independent to set the record straight – admitting that he didn’t actually see the incident in question and that he very nearly got mashed to a waxy pulp by an irate Kirkland because of what he told the media post-match.

Said Warnock, via the Indy:

“It’s been a traumatic week after the events at Hillsborough last Friday, which was a full-blooded Yorkshire derby marred by our supporter confronting Sheffield Wednesday goalkeeper Chris Kirkland. Everybody will be delighted the culprit got a custodial sentence but most will have wished it was longer than four months.

“I didn’t see the incident at the time. We’d just scored and I was trying to make sure my players got their focus back on the game as you are at your most vulnerable when you have scored. Our first thought on the bench was that Chris had been hit by a missile.

“Then one of our staff said he’d been hit by a fan but “it looked like he went down easy”. When the match finished, TV wanted to interview me straight away and, like a fool, I actually repeated this when they asked me about the incident.

“I went back in the dressing room and immediately got a phone call from (his wife) Sharon. She said: “You can’t say that about their goalie. The fan hit him. Have you seen it?” I had to admit I hadn’t, so I asked our IT guy to find the incident on his computer – we record all matches as they happen.

“Then I had a shower, as I usually do after a match. I came out, saw the incident on the computer, and immediately realised the guy had really lunged at Chris and it was no wonder he went down. I thought I’d better get dressed and go and apologise to him.

“But as I was standing there in my briefs with a towel the door opened, a furious Chris Kirkland pushed his way in and grabbed hold of me. He’s a big lad and but for the intervention of one or two of our staff he might have done something he regretted. But I honestly couldn’t blame him. I’d have felt the same if it had been the other way around. I apologised to him unreservedly.”