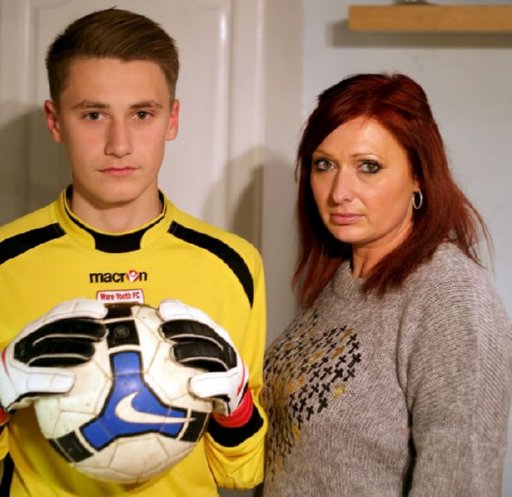 The Hertfordshire FA have issued young goalkeeper Owen Thompson with a two-match ban and a £25 fine after being reported after a Sunday League game for swearing at the referee. Nothing untoward there, you might think and ordinarily you’d be right – but, you see, 14-year-old Owen suffers from Tourettes Syndrome.

After conceding a contentious goal that led to his side, Ware Youth U15s, eventually losing the game, Thompson involuntarily told the ref to “f**k off,” with the official then registering a complaint with his higher-ups. The ban and fine landed on the doormat shortly after.

Thompson is quoted in the Daily Mirror as saying:

“It does not seem fair. Football often suppresses my ticks, but I cannot control them when I get upset or stressed. [The ref] just really stressed me out.”

His mum, Melanie (pictured above), added: “The punishment is ridiculous. Football is a really important part of his life.”

You’ll be glad to know that Ware Youth have since appealed against Owen’s punishment though, despite being clinically diagnosed with Tourettes over a year ago, Hertfordshire FA haven’t agreed to throw his disciplinary out and are still holding out for a one-match ban and a £15 fine.

“The player swore at the referee and then refused to talk to him when asked to explain his actions. The committee decided the lack of respect shown was not connected to his medical condition.”