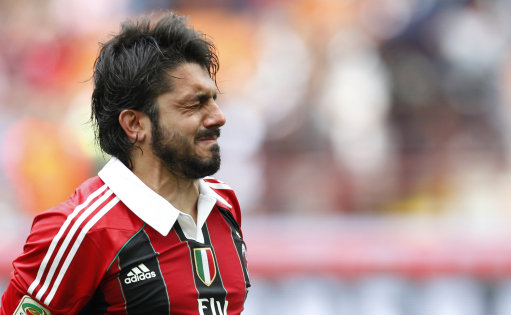 Gennaro Gattuso, currently FC Sion, has obviously been spending some time on the psychiatrist’s couch since moving to Switzerland, back-tracking through the corridors of his mind and revisiting his most painful memories – that is, if his latest revelation about a particular brush with Gazza during his year (1997/98) at Rangers is anything to go by.

“After my first training with Rangers I went into shower, came back into the dressing room, and there was a foul smell in the room which was coming from my belongings.

“I took my boxer shorts out of my bag and saw that there was something heavy in them. Paul Gascoigne had crapped in my underpants.

“Gazza is a madman who makes such jokes. He’s crazy, that’s all. This is his way of being. Then I had to drive home without pants on!”

Shitting in someone else’s shreddies? SOUND THE BAAAAAANNNTTTAAAAAHHHH KLAXON!

Seriously though, gross – though it’s not like Gazza was a pioneer dealing in this kind of fecal-based camaraderie. Pinching off a log and delicately laying on teammate’s clothes/shoes was a bit of a mainstay in the repertoires of many a ‘dressing room pranksters’ (yes, you’re right to instantly picture Neil Ruddock) of yesteryear.

‘Why?’ is quite another matter.