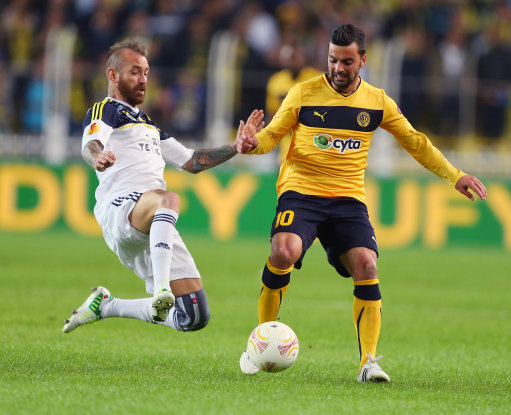 Fenerbahce midfielder Raul Meireles has been banned for 11 games by the Turkish Football Federation after being found guilty of spitting at the referee during his club’s derby game against Galatasaray at the weekend – a game in which Meireles was also sent-off for picking up two yellow cards.

The referee in question, one Halis Ozkahya, not only accused Meireles of aiming globules of stringy gob at him but of also ‘directing a homosexual gesture in his direction’, claims which Meireles is not happy about, telling the Turkish media:

“I’m really annoyed at being accused of spitting at the referee. I have an eight-year-old child, can you imagine if kids at school start saying your father spat at a referee? This could ruin my reputation in the eyes of my child.

“I have many gay friends who I deeply respect. The hand gesture I made is directed at the referee caving in to the pressure of the home fans. That hand gesture was to tell him he was scared. Look at my hairstyle, what I wear, I’m not a prejudicial person, my hand gesture was in no way, shape or form a homophobic one.

“I don’t know what the hand gesture for calling somebody gay is in Turkey but what I did was entirely based around the referee being a coward and bowing to the pressure. The referee’s accusations are outrageous and defamatory. I will be taking legal action against him to prove my innocence.”

Regardless of the former Liverpool and Chelsea man’s ire, the Turkish Football Federation have upheld Ozkahya’s claims and doled out a whopping great 11-match ban, with Fenerbahce using an official club statement to announce that they planned to appeal what they called an “unfair, unfounded and unacceptable” punishment.

Thanks to Komu in the comments, we’ve got footage of the gesture…