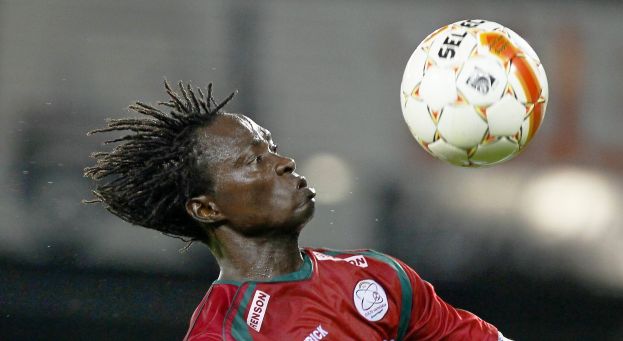 There’s throwing a hissy fit and there’s THROWING A GODDAMN F*£$”$£$£!”£**KING HISSY FIT which is exactly what Cameroonian striker Ernest N’For did when his club KV Kortrijk, who currently play in the Belgian top flight, turned down his transfer request recently.

N’For has since been sacked by Kortrijk for his reaction, with club CEO Patrick Turcq telling Het Laatste Nieuws that “there is no way back” for the Cameroonian striker, who throttled Turcq and threatened to kill him and Kortrijk manager Hein Vanhaezebrouck when the executive denied his request to join Azerbaijani club Neftchi Baku.

“I have made a complaint to the police about this,” Turcq told Het Laatste Nieuws. “He grabbed me by the throat and both me and my family were threatened with death. He was overcome with blind rage. It’s something that I’ve never experienced before in my life.”

“It was about his transfer to Neftchi Baku where he was hoping to go. He quoted himself a transfer price that was less than half of what I had agreed with Bergen or even Waasland-Beveren.”

N’For then took to Facebook to pontificate about his situation at Kortrijk, saying: “Football is the most thankless world that exists. Today you’re a star, but if you are not needed, you’ll be treated like a bandit.”

Maybe, Ernest, maybe. Even so, we can’t feel like you flew off the handle a bit there buddy.