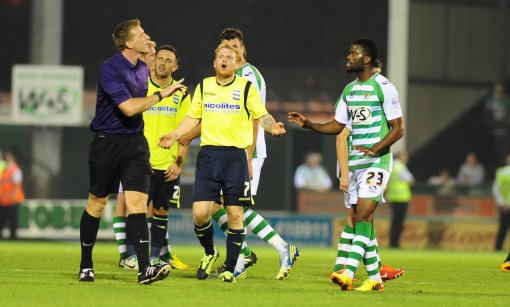 Things got a bit dicey at Huish Park last night as Birmingham City put home side Yeovil out of the Carling Cup via a penalty shoot-out, though not before they were allowed to walk in an unopposed goal in extra-time to make up for a particularly unsporting goal Yeovil scored in normal time.

Yeovil’s Byron Webster chipped in a 90th-minute equaliser to send the tie into extra time, though as the ball had been put out of play by Brum ‘keeper Colin Doyle beforehand so a Yeovil player could receive treatment.

Birmingham had stopped, assuming that possession would be returned to them in customary fashion, but Webster latched onto the loose ball and sent a long-range hit-and-hoper over Doyle to level the tie at 2-2 seconds before the full-time whistle was due to sound.

The Glovers then scored again to make it 3-2 in extra-time, at which point manager Gary Johnson finally, 16 game minutes after the goal was actually scored, decided Webster’s goal had been “ungentlemanly” (or his team had pushed their luck too far) and instructed his players to let Birmingham’s Lee Novak walk one in from the restart to square things up at 3-3.

Yeovil then lost 2-3 in the shoot-out – not to Birmingham, but to karma.