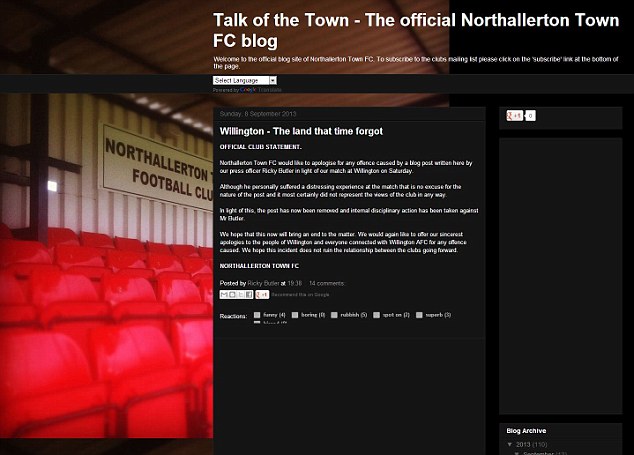 Northallerton Town’s club press officer has issued an official apology after using his match report of Saturday’s 4-3 extra-time defeat against Willington AFC in the FA Vase cup to suggest that his side’s opponents were both ‘inbred’ and ‘mental’.

Press officer Ricky Butler published his report on the Northern League Division Two club’s official blog under the title “Willington: The land that time forgot” and went on to liken Willington’s players to the deformed mutant family in horror film “The Hills Have Eyes”, also calling them “neanderthals” at one point.

Butler wasn’t finished there though, as he also lashed out at Willington’s fans, saying: “Their fans behind the dugout were getting quite excited, as though this was their annual day out from the local mental institute.”

Then came the suggestion that Willington’s gene pool wasn’t suitable for paddling in: “‘Welcome to Willlington. meet my mother, my wife, my sister,’ and only one woman was stood before us.”

Sounds like a cracking match report to us, but hey ho! Anyway, the good people of Willington took offence at Butler’s summary of the game and their townsfolk and demanded an apology, which they duly received via Northallerton’s blog:

“Northallerton Town FC would like to apologise for any offence caused by a blog post written here by our press officer Ricky Butler in light of our match at Willington on Saturday.

“Although he personally suffered a distressing experience at the match that is no excuse for the nature of the post and it most certainly did not represent the views of the club in any way. Internal disciplinary action has been taken against Mr Butler.”

listen to ‘Apology’ on Audioboo