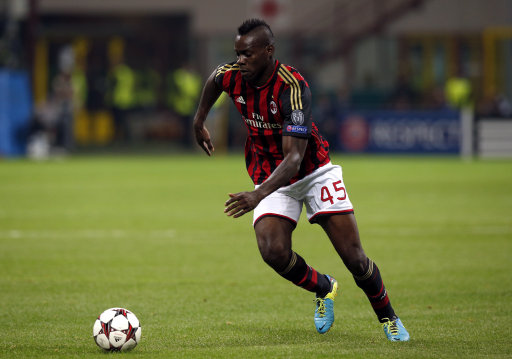 The official line is that Mario Balotelli was sent off following the final whistle of Milan’s recent Serie A game against Napoli (shortly after having missed a penalty for the first time in his career) for “intimidating” referee Luca Branti, with anecdotal evidence suggesting that the former Man City striker told the official: “I will kill you, you will pay for this.”

Whether or not that is 100% true will likely never be sussed, but the fact that Balotelli was shown a red card cannot be quibbled over and, for that, he has issued an apology…of sorts.

Speaking to Gazzetta dello Sport, Balotelli sort of apologised for his conduct at the San Siro in a strange, round-about, fleetingly third-person kind of way:

“I’m sorry, particularly for my team-mates, who I have abandoned. I’ve created a mess and it was not necessary. I should not have said certain things, but there is one thing that I don’t get: if Mario commits a bad foul, Mario has to be punished, and if somebody else commits a bad foul on Mario, then he should also be punished.

“It’s not like this in [the rest of] Europe. Red cards are red cards for everybody, like yellows. It’s the same for everybody. I made a mistake and lost control of myself, let’s say because I was provoked many times, and Mario apologises, but let’s not get carried away – I don’t need to apologise to everybody because it’s not like I killed anybody.

“I know playing football means taking knocks, but I don’t want to finish my career when I’m 28. There is no equality of judgement here. But I know that I have to be stronger myself too; more cool. Even Messi and Ronaldo get mad when they are hit, I can assure you. But I realise that if I want to reach the very top, I’ve got to resist certain situations.”

See? Yes, he (allegedly) threatened to kill somebody, but he didn’t actually kill anybody –  so everybody just calm down, yeah?