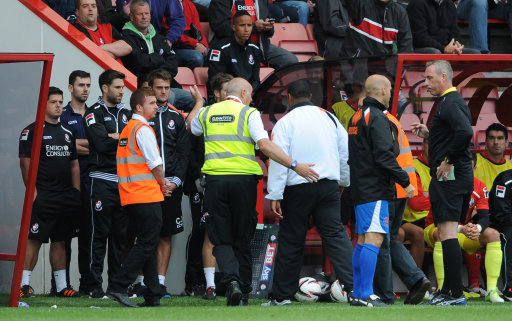 Good news everybody! Blackpool manager Paul Ince has been handed a whopping great five-game stadium ban for his godawful conduct on the sidelines during his side’s 2-1 win over Bournemouth last month after being found guilty of being a prize prick to the fourth official on the day, Mark Pottage.

The ban essentially means that Ince is prohibited from entering any of the next five stadiums that Blackpool play at.

Ince was sent from the sidelines for throwing a water bottle in frustration after Blackpool missed a late chance which accidentally hit a female fan (for which he immediately apologised) though his reaction to being sent from the dug-out was altogether less cordial – shoving Pottage “violently” in the chest before threatening to knock him out.

The FA have released their report into the incident in full and it really doesn’t do Ince any favours, with the referee’s report reading thus:

“At the end of the game as we left the field of play as a team of match officials we were confronted by a clearly very irate Mr Paul Ince.

“On confronting us Mr Ince asked why he had been sent to the stand. I explained to Mr Ince the reason why he had politely been asked to leave the technical area. It was then a clearly frustrated Mr Ince had said ‘and where’s your busy fucker of a fourth?’

“Mark Pottage, the fourth official, was stood behind Mr Ince at the time and said: ‘I’m here.’

“Mr Ince then turned around and violently shoved Mr Pottage with two hands in to the chest. Stewards then quickly stepped in and tried to usher Mr Ince to the dressing room area.

“As this occurred Mr Ince, being restrained by stewards and players of Blackpool, was repeatedly shouting in an aggressive manner: ‘I’ll knock you fucking out you cunt,’ to Mr Pottage.”

Defending himself and his conduct, Ince claimed that he thought big, bad Pottage was “fronting up” to him so pushed him back “non-violently” to get the fourth official out of his face:

“As I turned around, Mr Pottage stepped forward and was ‘fronting me up’ in my face. I felt intimidated, so I instinctively pushed him away.

“The push was not aggressive; only enough to move him away from where I was, only in order to avoid a real possibility of a one-to-one confrontation. However, I know I should not have pushed him and I wholeheartedly apologise.”

Ince also denied that he used the word “cunt”.

And this man wonders why he can’t get Premier League work.

Anyway, as a show of solidarity, the Blackpool Gazette have teamed up with local radio station Radio Wave to produce 10,000 cardboard Paul Ince masks for Seasiders fans to wear in the terraces at Bloomfield Road for Saturday’s game against Wigan in a bid to “lessen the impact” of their manager’s exiling… 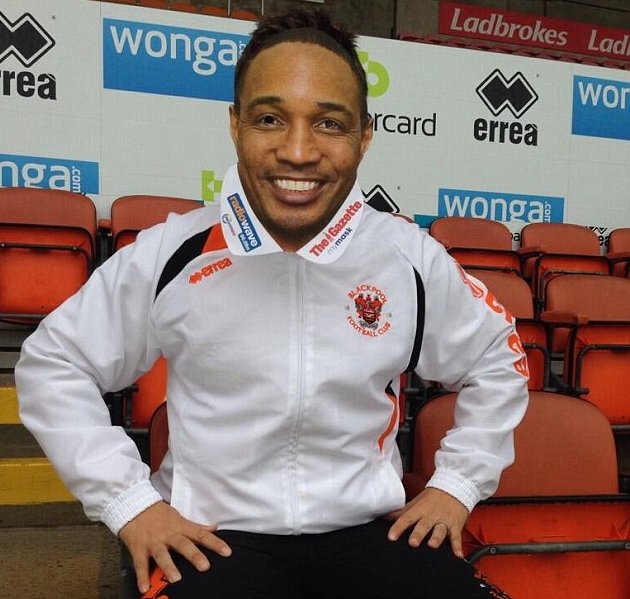 Which is, of course, utterly ridiculous.