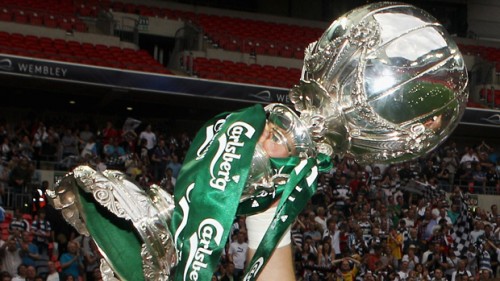 The FA Challenge Trophy tie between Colwyn Bay and Altrincham ended prematurely in strange circumstances on Saturday afternoon when, on 83 minutes, the referee on duty pulled up with a calf injury and had to limp out of the game.

After a request was put out over the stadium loudspeaker, a replacement referee was quickly sourced from the crowd when an Altrincham fan with Grade 5 refereeing qualifications volunteered to run the line and allow one of the linesman to take over as referee, but Colwyn Bay – who were trailing 0-2 and being played off the park by Altrincham – refused to allow the auxiliary ref to oversee the final seven minutes of the game after claiming to have smelled alcohol on his breath.

Colwyn Bay then also turned down an offer from Altrincham coach Ian Senior to run the line, as they obviously deemed that equally unpalatable.

Speaking after the game had been suspended with seven minutes left on clock, Altrincham chairman Grahame Rowley told the BBC:

“I hope common sense prevails. We hope we don’t have to come back for seven minutes. We were dominating. They should award the game to us.

“They would not put forward anyone themselves. It’s a poor show.”

Colwyn Bay are now hoping the game gets replayed in full on Tuesday evening after, in the words of their manager Frank Sinclair (yes, that Frank Sinclair), the club merely refused to let “any Tom, Dick or Harry come in and finish the last 10 minutes”.