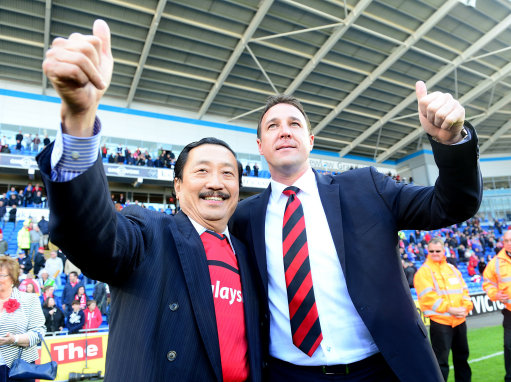 Cardiff City’s delightful owner Vincent Tan has reportedly sent an email to manager Malky Mackay to inform the Red Blue Dragonbirds manager that he is to either “resign or be sacked”.

According to BBC Sport, along with a list of his grievances with Mackay in a wide range of areas (including his “signings, transfer budgets, results on the pitch, style of play and his track record as a manager”), Tan issued the Scot with the ultimatum after several days of squabbling between the two came to a frothy head.

We’d have to argue that Mackay’s record as a manager is actually rather good, though one of Tan’s main gripes seems to be the fact that Mackay spent £15million (plus add-ons) over his £35million transfer budget with meagre returns to show for it so far this season.

To be fair, you can buy an awful lot of leather gloves, high-waisted trousers, hair oil and strategically-worn replica shirts for that kind of money.

Indeed, Mackay has already publicly stated that he won’t resign from his post, which means Tan is going to have to sack him and pay up his contract if he seriously wants shot – leaving his aforementioned ultimatum looking a bit daft in actuality.

This is what happens when rich, oblivious businessmen buy football clubs as playthings. ‘Tis a shame and a sham is what it be.