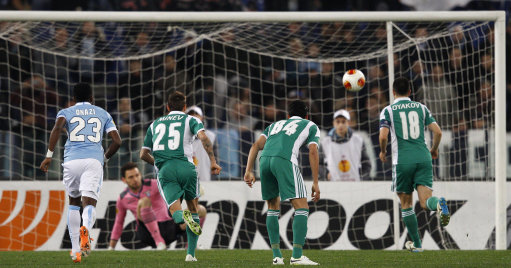 While his side managed to pip themselves a 1-0 win, Ludogorets captain Stevoslav Dyakov had a rotten old evening against Lazio in the Europa League last night, though, mercifully, it only lasted 55 minutes.

Dyakov was sent-off ten minutes after half-time for picking up a second yellow card but not before he saw his early ‘Panenka’ penalty saved by Lazio ‘keeper Etrit Berisha, who had enough time to dive and get back to his feet before Dyakov’s weak shot made it to him.

Having collected the chip with ease, Berisha even gave the Ludogorets skipper a contemptuous wag of his finger just to rub salt into the wound…

Oh dear, oh dear. It never looks good when they’re saved, does it?