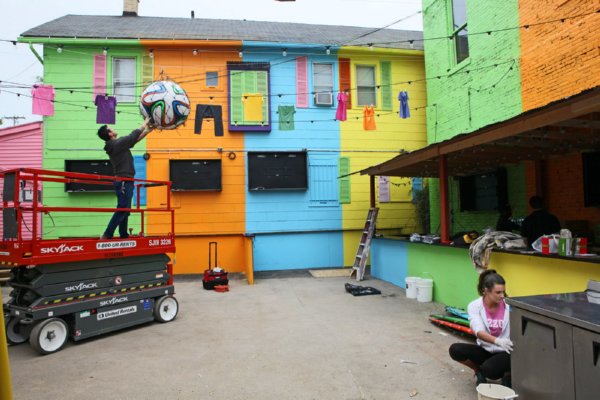 The owners of a pub in Milwaukee have come in for a bout of heavy criticism after opening a Brazilian favela-themed beer garden especially for the World Cup.

The Nomad World Pub is a well-known hub for Milwaukee football fans and decided to attract customers during the tournament by constructing a replica of a colourful Brazilian slum – referred to as the “Nomad World Cup Shanty Town” on their website – in their adjacent car park.

However, according to local newspaper Milwaukee Journal Sentinal, the project has been heavily criticised by Twitter users, Buzzfeed and several other blogs for making light of the extreme poverty in which millions of Brazilians live – while selling obnoxious craft micro-brews for $9 a pop and screening World Cup games on six huge flat-screen TVs.

“We weren’t expecting the criticism,” said Keanen Kopplin, the Nomad’s general manager. “(The favela) was supposed to be a celebration and complement to the spirit of Brazil.”

He also added that The Nomad had no intention to taking the favela decorations down until the end of the tournament, as originally planned.

(Via JS Online/Photo: Michael Sears/Thanks to Pies fan Charles Simonsen for the tip-off!)