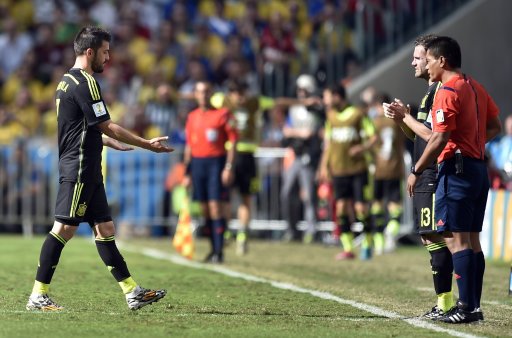 We must admit it seemed a little callous at the time, but Vicente Del Bosque has admitted he was unaware that David Villa was playing his final game for Spain when he hauled the striker off with 33 minutes remaining of yesterday’s World Cup dead rubber game against Australia.

The heart-broken Villa, who had already scored a brilliant back-heel to notch his 59th goal in 97 international appearances and was making a decent fist of making everybody wonder why he hadn’t been used in the first two games, was visibly in tears after returning to the bench as Spain went on to win 3-0.

Claiming he hadn’t realised that Villa, 32, was playing in his international swansong, a bemused Del Bosque told reporters after the game:

“David seemed annoyed. He said it was his last game but I didn’t know. I’m sure he was upset.

“I was thinking about it was time to kill off the game and we did that.”

Hardly a fitting end for Spain’s all-time record top goalscorer, but at least we’ll always have that back-heel.