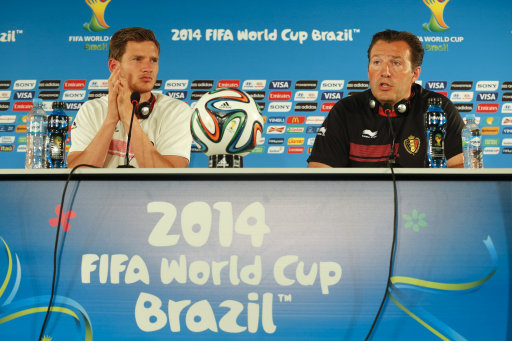 “I’d like to congratulate Argentina for being such massive arsecandles”

Fair play to Belgium coach Marc Wilmots: the guy had a decent stab at trying the whole “losing gracefully” after his side were shunted out of the World Cup by Argentina this afternoon – he just came up a little short.

As Tweeted by Independent journalist Ian Herbert (@ianherbs) live from Brasilia, here is Wilmots’ attempt at congratulating the victors:

Marc Wilmots accuses #arg of deliberately slowing the game. “We were not impressed with the Argentinians. It’s just an ordinary team.” #bel

Wilmots says #bel have NOT been beaten by the better team today. “If we equalise in last seconds they are dead.” #arg

Wilmots: “How many shots on goal did they have? If I had played this way I would have been destroyed by the Belgian press….” #arg

Wilmots also accuses the ref of favouring Messi and refusing to book him. He concludes: “We need to lose gracefully. That’s what I’m doing.”

Hey, at least you tried, Marc – that’s all anybody can ask.