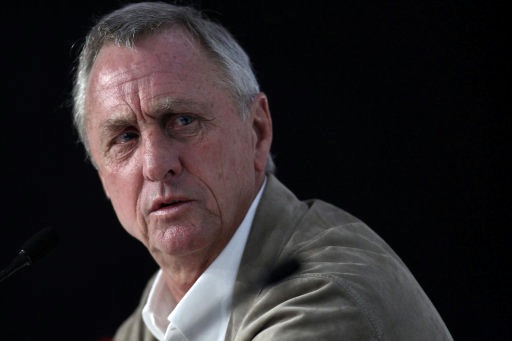 Cruyff is still very much aliyff

God knows what’s going on, but it seems that bafflingly stupid newspaper apologies are the “in thing” at the moment following Aftonbladet grovelling apology to the entire nation of Austria yesterday after one of their writers compared Red Bull Salzburg to both Adolf Hitler and Josef Fritzl.

Today comes news that Dutch newspaper Volkstrant, who have had to apologise to all and sundry after their bogus report on the death of Johan Cruyff circulated online earlier.

Thankfully, Jopie is alive and well and the paper simply published a test page of the new app version of their website by mistake.

Quite why it involved a mock story about their nation’s greatest ever footballer passing away is another question, but still they apologised thus…

“Due to an error on our new test site a message about the death of Johan Cruyff accidentally appeared on our website. We are sorry.”

Volkstrant editor Philippe Remarque then also issued a personal apology to Cruyff for the cock-up:

“On behalf of Volkskrant I offer my apologies to Johan Cruyff and anyone who has been upset by this.

“The app was tested this morning with fake stories, and a technician came up with this as a way of testing a major breaking news story.

“By mistake it appeared with this headline.”

FAO: The world’s media: Get a bloody grip guys, yeah?