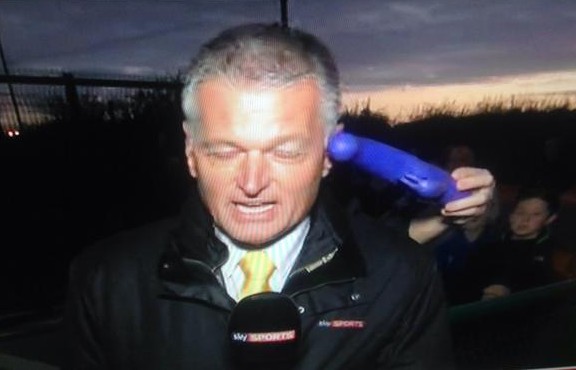 Ofcom have confirmed that they received numerous complaints from viewers over the various acts of debauchery that littered Sky Sports News’ rolling deadline day coverage on Monday.

Strangely the offensive volume of Jim White failed to attract a single complaint from the public, though eight viewers complained about witnessing reporter Alan Irwin having a sex toy inserted about his person outside Everton’s Finch Farm training ground.

There were further complaints about Sky Sports reporter Kaveh Solhekol fleeing his station outside Selhurst Park toward the end of the evening when a Palace supporters’ group, the Holmesdale Fanatics, staged an aggressive protest against Sky’s monopolisation and monetisation of English football coverage… 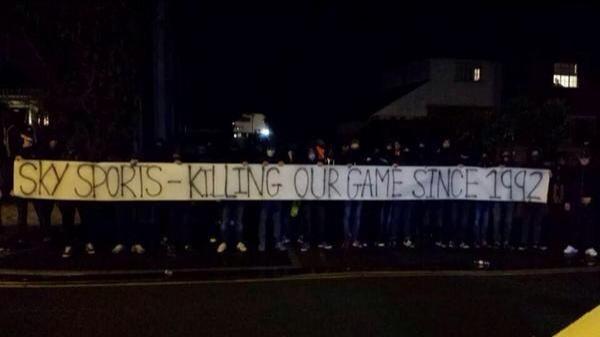 The Palace ultras chanted, “We f**king hate Sky Sports,” threw fireworks and flares and unfurled a banner reading, “SKY SPORTS – KILLING OUR GAME SINCE 1992,” before Solhekol was advised to leave the area by his security staff.

The Telegraph are also reporting that a second Sky Sports reporter, Geraint Vincent, was also advised to leave his post outside the Emirates by security before continuing to report in on Danny Welbeck’s move from inside the Arsenal stadium. 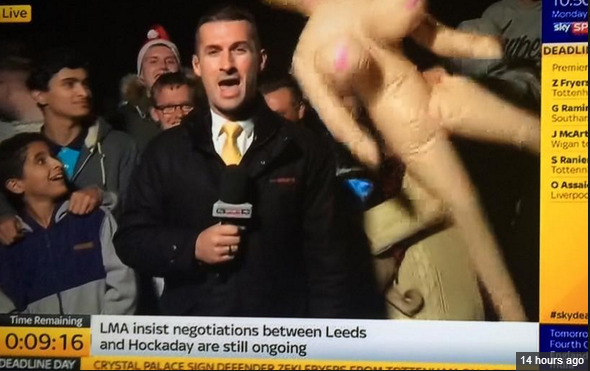 Elsewhere, Ofcom received further complaints about a fan throwing an inflatable doll at the camera and shouting “f*** her in the p****!” in a copycat version of an now-viral incident that occurred on US television a month or so ago.

For what it’s worth, Sky Sports have apologised for the chaos, with a spokesman for the broadcasters saying:

“Millions of viewers followed our coverage of Transfer Deadline Day, which included more than 270 live reporter updates from outside football clubs over the final 24 hours.

“We apologise to those whose enjoyment was spoiled by a small number of incidents and we’re looking into ways to avoid this happening again in the future whilst ensuring fans remain a key part our live coverage.”

Pies’ two penneth: The whole Sky Sports Deadline Day™ frenzy is a silly cult thing that needs nipping in the bud now before it really starts getting out of hand.

Having standing targets reporting live for 12+ hours straight is asking for trouble and, year upon year, that trouble is bound to escalate as fans moronically attempt to one-up last year’s hijinks.

Sadly, with the ratings being as inexplicably high as they are and the “Deadline Day” brand to maintain, you feel that Sky Sports won’t feel inclined to do a damn thing.