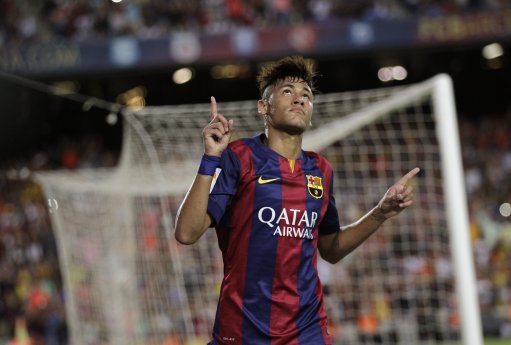 According to several Spanish sources, Barcelona have seen fit to hit Neymar with a fine for having the outright temerity to sign an autograph for a small child during the half-time interval of Sunday’s 0-1 win over Villarreal.

It’s being reported that Neymar, who had started the game on the bench, was emerging from the tunnel to warm up at half-time when he was flagged down by a young Villarreal fan in the front row at El Madrigal and asked for an autograph.

The Brazilian forward duly obliged, signing one of the boy’s shoes – much to the ire of Barca coach Luis Enrique, who allegedly fined Neymar €6,000 after the game for doing so!

The incident was inquired about at a press conference with Barca director Andoni Zubizarreta on Tuesday, though his reply was non-committal.

“We have no problem with Neymar. His talent is beyond question,” said Zubizaretta.

“Other issues and sanctions are managed in the locker room and that’s where they stay.”

What’s the world coming to, eh?