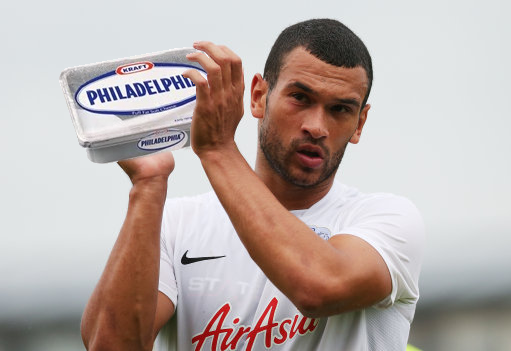 QPR defender Steven Caulker faced an embarrassing ordeal earlier in the week when he was arrested and handcuffed outside Tesco for half-inching a tub of Philadelphia cream cheese!

According to the Independent, Caulker was stopped by staff outside the Tesco Express store in Weybridge, Surrey after failing to pay for a £1.85 tub of Philly.

Realising he’d made an honest mistake, the 22-year-old was in the act of returning back inside the store to pay for the cheese when the police turned up and slapped the cuffs of him.

As the Indy put it: Witnesses said that Caulker looked “pretty alarmed” at the arrest but he was immediately let go with the Police confirming that no crime has been committed and that there was merely “some confusion” between the staff about payment.

A Tesco spokesman said: “Police were called after an allegation of shoplifting last Tuesday. The matter was resolved at the store and our store colleagues decided not to press charges.”