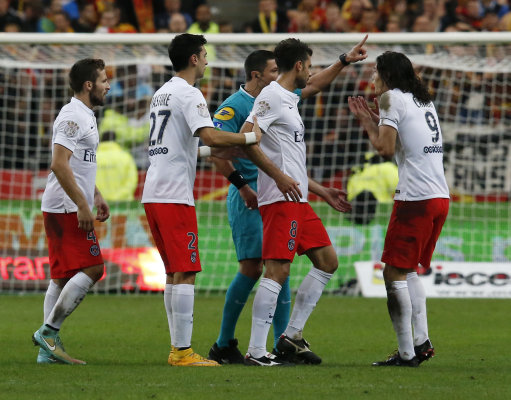 Already plagued by injuries, PSG will now have a suspension to deal with over the course of the next few weeks after Edinson Cavani was one of three players sent off during their feisty 1-3 victory over RC Lens at the Stade de France on Friday evening.

Lens had both Jean-Philippe Gbamin and Jerome Le Moigne dismissed over the course of the evening, with the former picking up a second yellow in the 54th minute for shoving Cavani in the penalty area.

The Uruguayan duly tucked away the resulting spot-kick but then went and earned two bizarre bookings in the space of a few seconds to get himself sent off too.

Firstly, the referee took offence at Cavani’s “sniper” goal celebration and cautioned the striker for it, only to administer a second yellow almost immediately when Cavani, fairly understandably, queried his first booking.

Now the first yellow is open to interpretation but we honestly think the referee gave Cavani the second booking for laying his hand upon the official’s sainted elbow.

Seriously, how precious can you get?