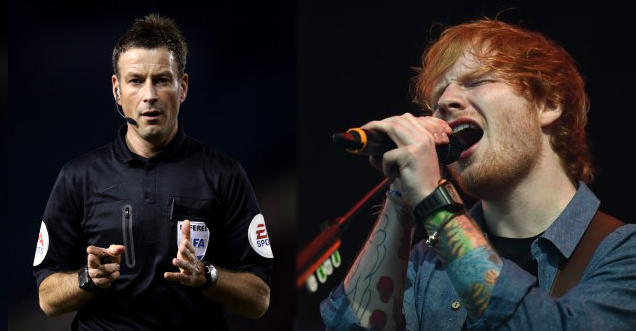 The FA have suspended Mark Clattenburg from refereeing any Premier League games this weekend after he sullied his name by attending an Ed Sheeran concert immediately after officiating West Brom’s 2-2 draw with Crystal Palace last Saturday.

According to ESPN FC, Clattenburg shot off after the game on his own so he could dart back to Newcastle to make the Sheeran show at the Metro Radio Arena that evening.

However, FA rules state that referees must travel to and from games with their assistants for “security and integrity purposes”, therefore leaving them with no choice but to sting Clattenburg for metaphorically urinating in the face of protocol.

It’s also being alleged in some quarters that Clattenburg spoke to Palace manager Neil Warnock while sat in his car after the match – which is, of course, another big no-no.