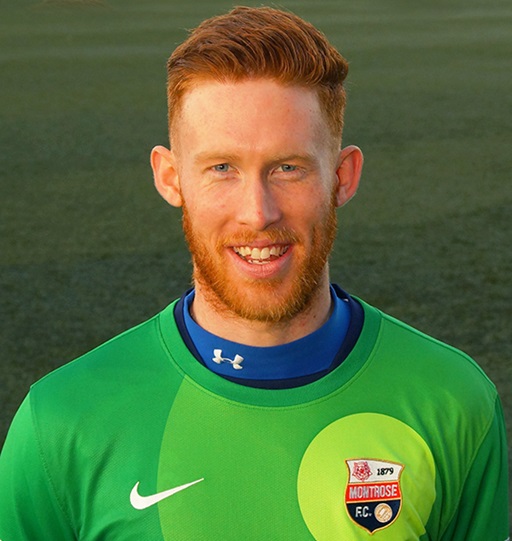 As rough shifts in the Scottish fourth division go, Montrose ‘keeper Lucas Birnstingl suffered one of the very roughest last weekend as he shipped five goals in the Angus derby against Arbroath last Saturday.

To make matters worse, Birnstingl even conceded a goal scored by his opposite number when Arbroath stopper David Crawford launched a seemingly innocuous free-kick from the edge of his own penalty area which somehow ended up nestled in the back of the Monstrose net…

The crapalanche didn’t end there though, as Birnstingl also managed to get himself sent-off for serious foul play towards the end of the game after Montrose had  already made their three permitted subs.

This meant that striker Gary Wood was forced to go in goal for the final few minutes of the derby; his only task being to retrieve the ball from the net after failing to keep out the penalty Birnstingl managed to concede moments earlier.

Alas, his nightmare performance all proved too much for Birnstingl, with the 24-year-old Canadian packing his bags and jumping aboard the first flight back home.

According to The Daily Record, Birnstingl has since apologised to his manager George Shields for fleeing the scene so dramatically and offered to return to the club immediately, but Montrose have now cancelled his registration, deeming it best for both parties.

“Lucas also has been suffering from home sickness and that was a major factor in his decision to simply go home,” Shields told the local press.

“He has apologised for his actions and offered to come back.

“However, we do not feel that is a decision he should take just now.”

Poor guy. Here’s hoping one day he’ll be able reintegrate himself back into normal society.

For now, the wardrobe will be his home.