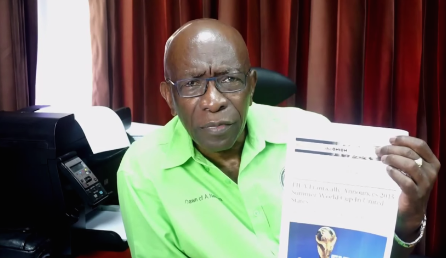 Ex-FIFA vice president Jack Warner, like several of his former cohorts, has been accused of racketeering. He’s been arrested, though he maintains that he’s innocent. Warner claims that his arrest was made in retaliation and that it is rooted in the United States’ failed World Cup bid.

He accuses the US of gross hypocrisy. How can the US attack FIFA when it was offered the World Cup 2015?

“The US applied to hold the World Cup in 2022 and they lost the bid to Qatar — a small country, an Arabic country, a Muslim country,” says Warner.

“I could understand the US embarrassment… Why is it [American prosecutors] believe that they have a right to the World Cup?”

He cites a story that FIFA allowed the US to stage the 2015 World Cup:

“Summer World Cup, 2015, from the very same organization that they are accusing of being corrupt. That has to be double standards.”

The only minor issue being that the USA 2015 story is a satire – a work of fiction.

As The Onion – the spoof news website – said at the time:

“After the Justice Department indicted numerous executives from world soccer’s governing body on charges of corruption and bribery, frantic and visibly nervous officials from FIFA held an impromptu press conference Wednesday to announce that the United States has been selected to host this summer’s 2015 World Cup.

“We are thrilled to reveal that, for the first time in 21 years, the World Cup will finally return to America, with matches set to kick off today at 5 p.m. local time in Los Angeles,” said FIFA president Sepp Blatter, smiling broadly before unveiling the tournament’s official logo, a hand-drawn stick figure kicking a soccer ball with “USA 2015!” hastily scribbled in black marker above its head…”

Sadly, our Jack failed to realise it was a piss-take before posting the following video statement on his own Warner.tv website.

“If FIFA is so bad, why is it the USA. wants to keep the FIFA World Cup?” he pontificates, pointing to a print-out of the bogus report.

The long and short of it? FIFA is almost beyond parody…almost.