With a Euro 2016 qualifier against Wales in the offing this weekend, a group of hardy Belgium fans set out driving across the mainland continent earlier in the week in order to watch their side live in action at the Cardiff City Stadium tonight.

However, a slight GPS mishap left the travelling band of pilgrims facing quite a hefty three-and-a-half-hour detour.

Realising their error, the fans called into Studio Brussels radio station at 8:30 this morning to inform host Siska Schoeters of their plight.

As documented on the HLN.be news website, the group explained that they’d accidentally driven to the ‘wrong Wales’ after failing to double-check the directions their Sat Nav had supplied.

Yep. Before starting out, the Belgians had accidentally set their Sat Nav, not for Wales the country, but for Wales the small village in South Yorkshire, just outside Sheffield – some 200 miles away.

This map displays the magnitude of their error… 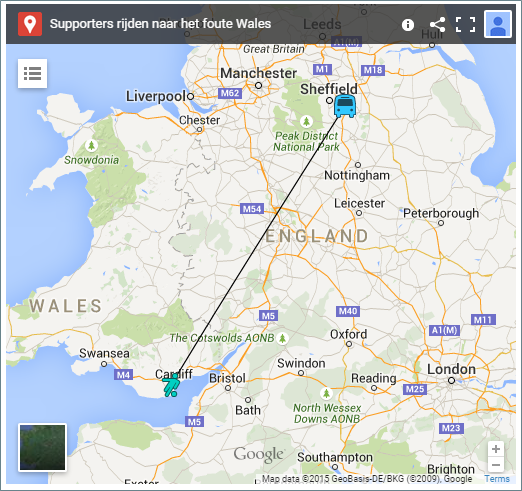 With kick-off now just six hours away (at time of writing), we can only assume that they’ve reached Cardiff or somewhere thereabouts by now.

The difficult bit will probably be staying awake through the game after 18 hours on the road.