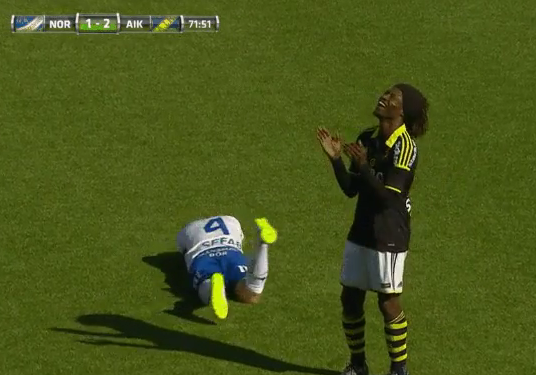 Andrea Johansson, captain of Swedish side IFK Norrkoping, has issued a public apology stating he is “very ashamed” of the frankly astounding piece of play-acting he attempted against AIK at the weekend.

As AIK striker Mohamed Bangura innocently pointed up-field, Johansson sidled up behind and deliberately bumped his face into Bangura’s outstretched arm before hitting the deck in ‘agony’ as if he’d been clouted around the kisser.

Footage of the baffling incident subsequently did the social media rounds, with agog football fans lining up to deride the defender for his shameful conduct.

Johansson has now issued a formal apology for his behaviour via a statement issued on the official Norrkoping website:

What I did was wrong and has no place in football. I had a quick brainwave of which I am very ashamed … When I see things like this on TV it makes me angry and it makes me extremely disappointed that I did it.

From now on, my focus will be on the future, on the preparations for our next match … My commitment and my desire to win will not be affected.

I will continue to work even harder to be the role model I want to be, on and off the field.

We should think so too.

Here it is again, just for old time’s sake…