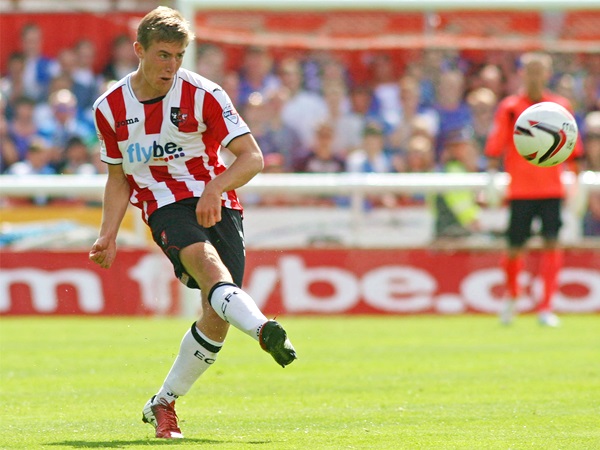 Seeing as though his side were sounded beaten 3-0 on their travels, it’s safe to assume that Exeter City winger David Wheeler didn’t really get much enjoyment out of last weekend’s League Two game against Northampton Town.

However, we can only imagine that Wheeler’s dismal afternoon took a turn for the even less enjoyable after meeting up with his girlfriend after the final-whistle, only to find that he’d inadvertently managed to break her wrist during the game.

Sat in the away end at Sixfields watching her other half in action, Alice Woodyatt was hit by one of Wheeler’s shanked efforts on goal.

Rather stoically, Alice managed to make it to full-time before being carting off to A&E, where she was informed that her boyfriend’s hopelessly wayward shot had fractured her wrist.

Alice, a 24-year-old PE teacher by trade, told The Sun:

I love to watch David play for Exeter and took all of my family to the game – including my grandad who is David’s biggest fan.

David didn’t know the ball had hit me and I didn’t want to make a fuss.

I didn’t realise how bad it was straight away so I sat and watched the first half – but by the second half I thought maybe something had happened.

People are amazed I stayed to the end but David has been playing well and I wanted to watch him no matter what.

After taking his poor, broken girlfriend to hospital, Wheeler himself then fleshed out the story in his column for the Exeter Express & Echo:

I knew one of [my shots] and one of the other lads’ shots went near but when I looked over she was obviously putting on a brave face.

We later found it was a wrist break. I’m amazed that Alice managed to watch the whole game in that much pain.

To be fair, it seems that Alice has already forgiven and forgot:

It was just a freak accident. I can laugh about it now and all of our family have had a good laugh.

What are the chances of something like that happening? It’s just one of those things.

Quite. Indeed, by the sound of it, the safest place to sit at an Exeter City game is actually inside the goal itself.