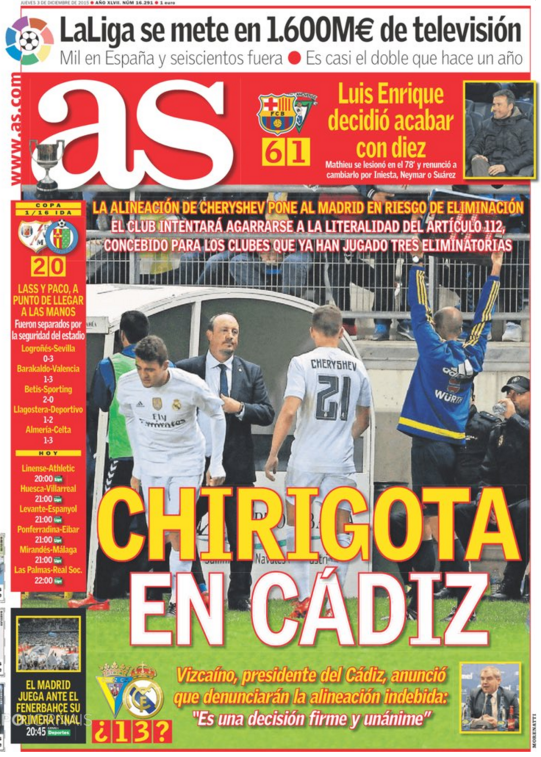 Real Madrid are facing expulsion from the Copa del Rey for fielding an ineligible player during their last-32 tie against Cadiz last night.

Denis Cheryshev was named in Rafa Benitez’s starting line-up and went on to open the scoring for Real in a 3-1 win inside the first five minutes.

Real’s selection cock-up only came to light when it was pointed out on social media shortly before the game. Cadiz fans in the stadium then began chanting “Benitez, look at Twitter!”.

Benitez denied having known about the situation and used his post-match press conference to explain that he withdrew Cheryshev from the pitch as soon as he was made aware.

The club knew nothing and nor did Cheryshev. Villarreal hadn’t informed us and for this nobody knew anything.

We found out at half-time and for this, I insist, we substituted him to show our good faith.

The Spanish press have since jumped on the blunder, with precious little mercy on display this morning as incredulous reaction to “the bad joke in Cadiz” fills the sport pages.

Back over on Twitter, Barcelona centre-half Gerard Pique’s response was typically measured and impartial…

As if the Real fans needed more anti-Benitez ammunition, he also made the exact same mistake while in charge at Valencia in 2001.