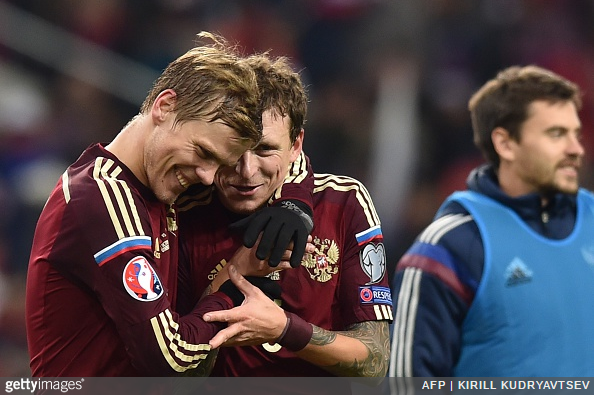 Russian international duo Aleksandr Kokorin and Pavel Mamaev have both been punished by their respective clubs after footage emerged of the two players supposedly blowing their way through €250,000 of champagne shortly after Russia’s inglorious Euro 2016 exit.

According to RT, Kokorin and Mamaev spent a fortune buying 500 bottles of Armand de Brignac for everyone in the Twiga nightclub in Monte Carlo.

The bottles were then brought out amid a hail of sparklers and golden confetti while the Russian national anthem played.

Mamaev’s club FC Krasnodar have already issued a statement in which they branded the player’s behaviour “outrageous and unacceptable”.

The club also confirmed that Mamaev has been fined and bumped down to the youth team for an unspecified period of time.

Zenit St Petersburg have done likewise with Kokorin, confirming that the midfielder has been stung with a “substantial” fine and shifted to the ‘B’ team for his crimes. 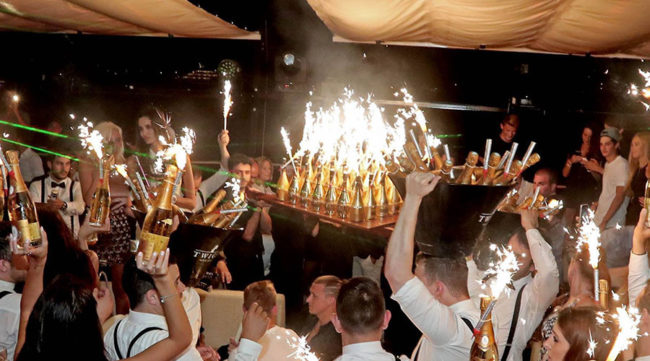 For the record, both players have denied they purchased the champagne in the video, with Kokorin telling Sports.ru that the flashy booze was bought by another well-to-do Russian reveller in the club that night.

It would be foolish to deny that we were present [at Twiga]. But everybody who knows this place can confirm that there are always a lot of Russian visitors.

This was the case at this time. Someone was celebrating a birthday, and we just stayed there. Naturally, we saw those bottles being ordered, heard the Russian anthem, but why accuse us of organising all this?

We do not have any relation to the woman responsible, nor to her entourage, and to the money mentioned by the media. on the money referred to in the media.

As it happens, Kokorin’s account of the night in question has been corroborated by the nightclub’s owner, ex-QPR owner Flavio Briatore, via his personal Instagram account.

The players came for dinner at Twiga with the wives. After dinner they stayed in the club to smoke shisha.

There was a private party organised by some Russians. They recognized Kokorin and Mamaev and as a sign of respect, as they are fans, they started sending them bottles of champagne and they asked our DJ to play the Russian national anthem.

Then other Russian clients also wanted to show their respect and sent the two players other bottles, so Kokorin and Mamaev had the table full of bottles.

Briatore also stressed that the darnedest thing was the Russian players weren’t even drinking alcohol.

However, the entire episode hasn’t gone down well with Russia fans, who took umbrage at the indulgence on display having been forced to sit through a truly miserable outing in France.

The general response was perhaps best summed up by the head of Russia’s Investigative Committee, Vladimir Markin, who took to Twitter to quip: “Of course other people were pouring [the champagne]. Those two would’ve just missed the glasses.”

We think that might just be a subtle reference to Mamaev and Kokorin both failing to even come close to scoring at Euro 2016.