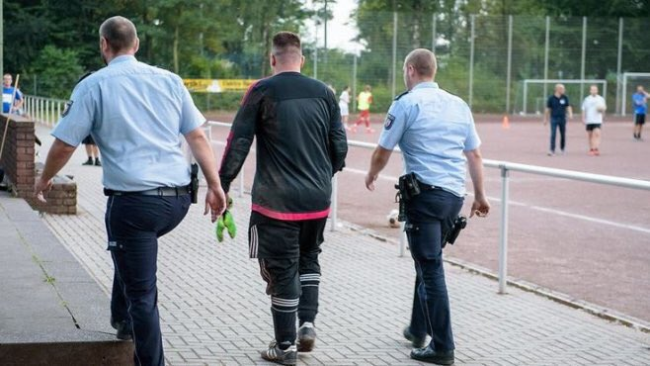 An amateur German goalkeeper found himself led away by policeman after putting in a shift so poor it was quite literally deemed to be criminal.

SV Vonderort ‘keeper Marco Kwiotek managed to concede 43 goals in a local derby against rivals PSV Oberhausen, letting in one goal every two minutes on average.

Indeed, Vondervort – who were only able to field eight players – found themselves 35-0 down by half-time at which point Oberhausen decided to take three of their players off the pitch in order to even up the sides.

Kwiotek only went on to concede a mere eight goals after the interval, but that didn’t stop two policemen turning up to Vondervort’s training pitch five days later to talk to ask the beleaguered ‘keeper a few questions about his individual performance.

This coming via The Sun:

Kwiotek called out to players as he was led from pitch by cops at the club’s base in Bottrop, western Germany: “They just want to clear some things up.”

He has not been seen since and police have refused to comment on why he was taken into custody.

The circumstances of the police inquiry are unclear and Kwiotek has since failed to answer his phone.

Vonvervort’s managing director has since assured German newspaper Express that he hopes Kwiotek will be available for selection for their next game.

Let’s face it, they probably can’t afford to start losing any more of their players.