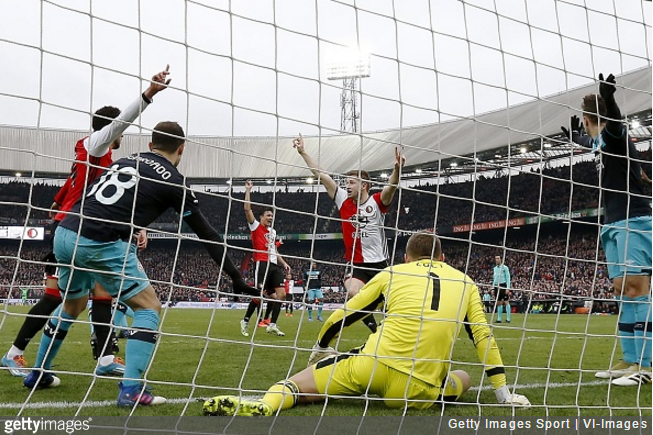 PSV were all but knocked out of the Eredivisie title race on Sunday afternoon thanks to a 2-1 defeat away against league leaders Feyenoord.

The scores were level at 1-1 until the 82nd minute when PSV ‘keeper Jeroen Zoet conceded an own-goal that may take some explaining.

With Zoet having saved a shot right on the goal-line, the Hawkeye system concluded the ball did not cross the whitewash and Feyenoord’s protests were waved away.

However, the reprieve lasted roughly one millisecond, right up until the point that Zoet triggered Hawkeye by scooping the ball up into his arms, thus carrying it over the line and into the goal…

Here it is again in super slow motion…

The own goal that knocked PSV out of the Eredivisie title race. As soon as Zoet pulls the ball back, the goal-line system rules it as a goal pic.twitter.com/WS2GJnopmC

Thanks to Zoet’s brain-blip, Feyenoord went on to win and extend their lead at the top of the table, taking them five points clear of Ajax in second and 11 points above PSV in third.