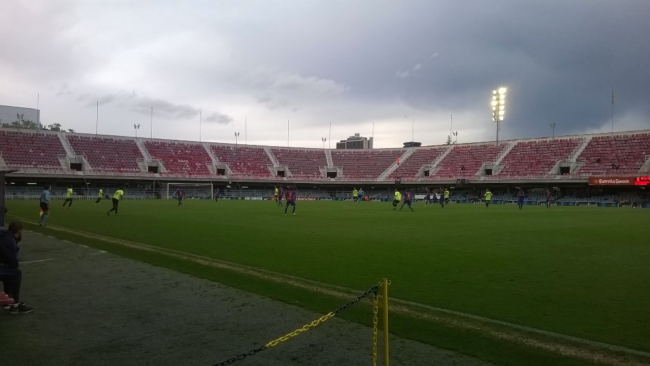 Remember yesterday when we brought you news of a defeat so heavy that it caused CD Eldense to withdraw from the Spanish third tier with immediate effect? Well, it would appear that the saga doesn’t begin and end there.

The day after the match (i.e, today), Eldense’s head coach Filippo di Pierro was arrested by police who are reportedly chasing up allegations of corruption pertaining to Saturday’s Segunda Division B fixture.

Di Pierro was detained on Monday evening with a number of players also being quizzed by authorities.

Even prior to Di Pierro’s arrest one player accused his teammates of throwing the game.

Indeed, Eldense player Cheikh Saad informed radio station RAC1 that several of his teammates had sought to fix the match:

There are four players involved in match fixing. I don’t care what happens, but when I can, I will give the names of these players.

Half an hour before playing the game against Barcelona B I was starting, but then I was out of the line up.

They told a teammate this game was fixed and if he wanted to play he should not score goals.

They didn’t ask me as they knew what my answer would be. The coach knew something, I’m sure, and the players too.

Eldense lost 12-0 to Barcelona B, a result that sealed their relegation.

In the direct aftermath, the club announced they had ceased all sporting activity and were terminating their contract with their Italian investors.

However, it looks like the thumping wasn’t quite as galling as it might have been for several people involved…

The Spanish FA are said to be monitoring the ongoing police investigation with interest.