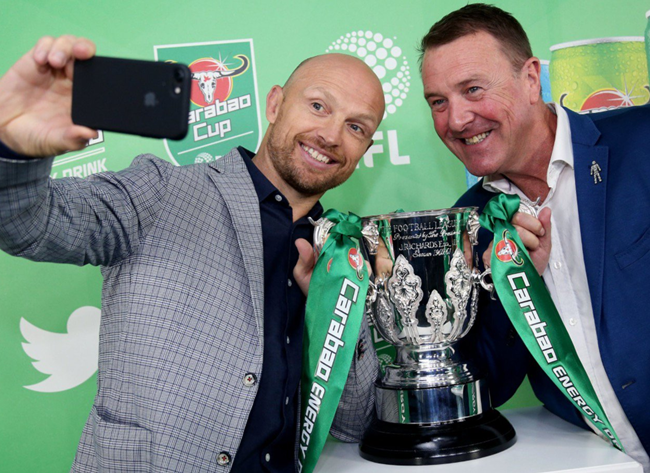 Precisely two days ago, the EFL promised us that the draw for the fifth round of the Carabao Cup would be nothing shy of revolutionary.

Firstly, we were stunned by the revelations that the draw itself would be streamed live on Twitter for the very first time ever.

As if that wasn’t enough, the EFL brought the house down by confirming that the draw would be conducted by two members of the British sporting aristocracy, namely Matt ‘Daws’ Dawson and Phil ‘Tuffers’ Tufnel – one a former rugby player, the other a former cricketer, both now conjoined by a shared love of guffawing at each other’s shirts.

Sadly the organised removal of eight balls from a bowl proved beyond the Daws, Tuffers, the EFL and Carabao, who were regrettably forced to delay the draw due to “technical glitches”.

Alas, almost two hours down the line, the fifth round draw is still deadlocked at the preliminary stage…

Update: Twitter engineers continue to work on the problem. The EFL will be bringing you the draw as soon as is practically possible

You can just feel the remainder of the League Cup’s dwindling prominence oozing away down the drain like a punctured can of luminous green, sugar-caked energy drink…

Give it Red Bull till the end of the season. @Carabao_Cup

UPDATE: Just one hour and 50 minutes later than billed, the Carabao Cup fifth round draw has finally taken place.

Here’s how the quarter-finals look…

Also, it turned out that the broadcast wasn’t live after all but pre-recorded and broadcast “as live” on Twitter, and with the big four teams all being kept apart.

What a massive bag of bollocks.