Raheem Sterling has been moved to explain the gun tattoo he has on his right leg after The Sun used an image of the England forward as the basis of yet another pointlessly vindictive front-page hatchet job.

Over the past few years, The Sun (and the Daily Mail) have repeatedly targeted Sterling for heinous crimes such as buying a house, owning a sink, eating breakfast, being a “Footie Idiot”, shopping, flying on an EasyJet plane, having a family, being tired, etc, etc.

Honestly, we find it hard to believe that these ludicrous, asinine articles actually shift newspapers, but they obviously spike the numbers somehow – hence the relentless onslaught.

Indeed, Tuesday’s Sun front page once again features a massive yowl at Sterling and a side-salad of fabricated outrage, this time over a piece of body art he got several months ago. 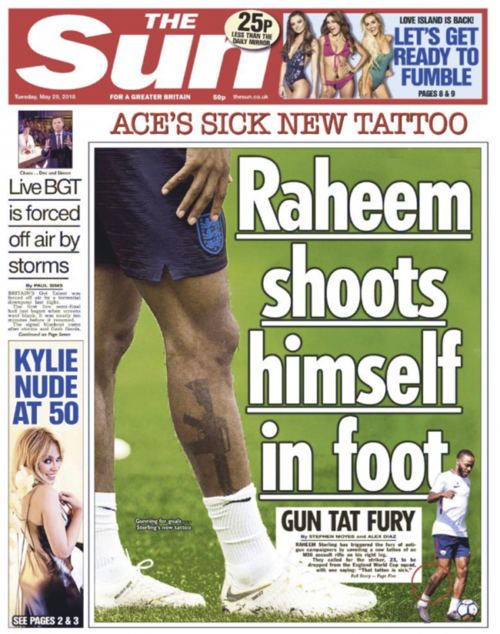 Of course, the condemnation of the petty article and the media’s perverse obsession with Sterling was swift and thorough – if only confined to social media – but it still ensured that the tabloid in question managed to coax the reaction and attention they crave.

For what little it’s worth to them, Sterling himself posted a sincere explanation of the tattoo on Instagram, revealing that it’s actually a poignant reference to the death of his father – a profound trauma Sterling went through at a heart-breakingly young age:

When I was two, my father died from being gunned down to death.

I made a promise to myself I would never touch a gun in my life time, I shoot with my right foot so it has a deeper meaning.

Will that make a blind bit of difference? Will it heck-as-like.

Basically, The Sun have pulled a photo of Sterling from a photo agency and constructed whatever idiotic story they can from it, chucking in vague rent-an-outrage quotes from whichever campaign group they could drum a faux-castigation out of first. They stirred the hornet’s nest and walked away. Just like last time, and the time before that.

And you know what? They’ll do it again next time too.