Alan Sugar, a member of the House of Lords, has brought yet another wave of consternation and hostility his way by sharing a truly awful, racist ‘joke’ about the Senegal World Cup team.

The following tweet was posted and then hastily deleted on Sugar’s account on Wednesday morning, the day after Senegal beat Poland in their opening match. 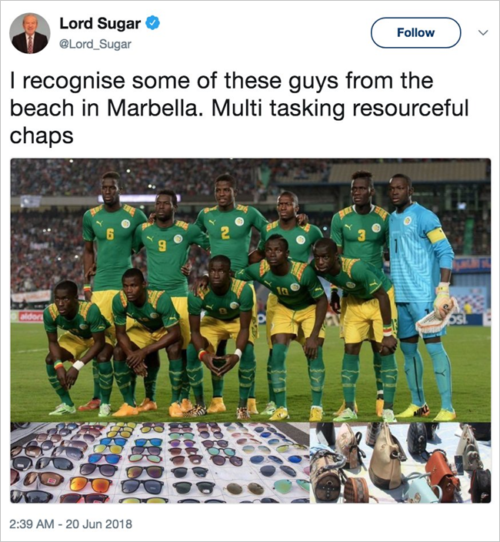 Sugar felt that spark of inspiration, opened Twitter, prodded at the screen with his grubby thumbs and committed this utter abomination unto the world. A truly astounding thought process.

Obviously, swathes of folk began admonishing Sugar within an instant, leading the 71-year-old to inexplicably defend the ‘joke’, explaining he thought it to be simply a bit of “fun” but that he’d removed it if people found it offensive. 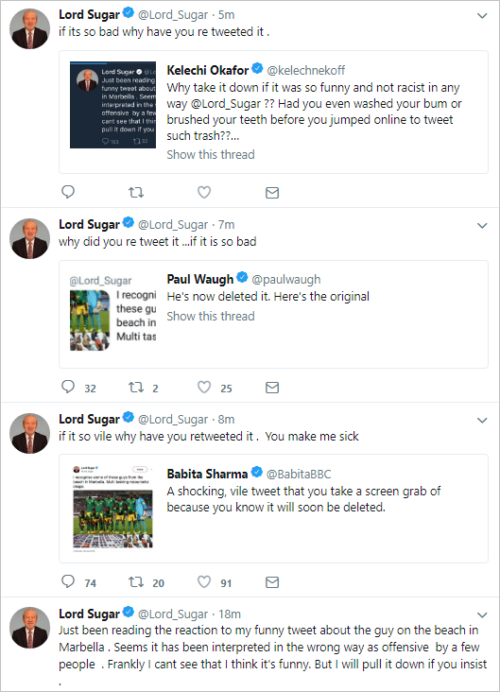 Lo and behold, a few minutes later, the original Tweet was deleted, with Sugar doubtlessly still unable to see what he did wrong. He was only having a laugh, after all.

Good grief. The man is an imbecile. Once a dim spiv, always a dim spiv.

While we’re on the subject of Senegal and racism, we heartily recommend Zito Madu’s (@_Zeets) rather excellent article for SB Nation examining the weighted language repeatedly used to describe black and African football teams and players.

It goes a long way toward explaining precisely what the problem (still) is.