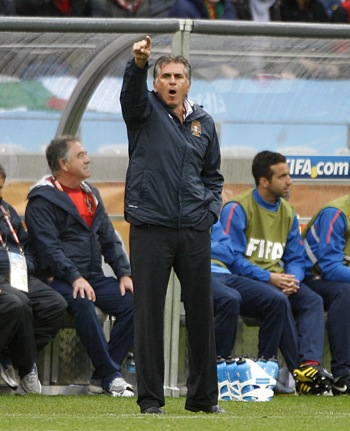 Doping officials? You’re gonna get your f**king head kicked in

Portugal gaffer Carlos Queiroz has been suspended for six months after it was ruled that he disrupted an anti-doping test ahead of the 2010 World Cup. Portugal’s Sports Institute said an inquiry found that Queiroz insulted an anti-doping team and that his aggressive manner unsettled their work, and that as a result, one of the inspectors failed to correctly carry out a test at the training camp.

The Portuguese Football Federation had already suspended Queiroz for one month for misconduct after the incident in May. But it said then that although he did use bad language, he had not caused any disruption.

The Sports Institute, which governs Portugal’s National Anti-Doping Agency, said on Thursday that it had sent the ruling to the PFF. Neither the federation nor Queiroz, 57, have yet to comment on the ruling, which would mean that the former Man Utd No.2 isn’t around for his team’s first four Euro 2012 qualifiers.

Queiroz has previously admitted he was pissed off that the unannounced early-morning tests had upset his players. He also admitted that he used inappropriate language in the presence of the doping team. Maybe even industrial language that he learned from a certain Scotsman?

Hmm, could this be part of a cunning plan by the Portuguese powers-that-be to force the unpopular Queiroz out of his job without having to pay a large golden handshake? Six months seems like a hell of a long ban for a bit of grumpy swearing.