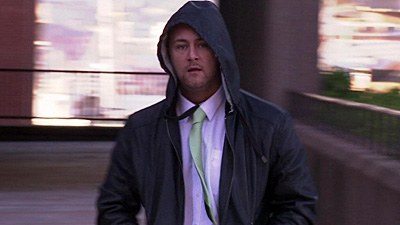 A Sunday league footballer was so angry at the prospect of being sent off, he drove his car onto the pitch and tried to run over the referee, a court heard today. He also threatened to shoot the ref.

Joseph Rimmer (pictured), 28, reacted so badly to the ref’s decision to award a free-kick and a yellow card against him that he left the field, got into his Range Rover and then drove onto the pitch, sending officials and players running for safety.

The referee, David Harkness, hid in one goal while Rimmer performed doughnuts on the pitch. Rimmer then got out of his car and threatened the match officials.

The mentalist, who works as fitness instructor and nightclub doorman (‘roid rage alert, methinks), appeared in court charged with affray and dangerous driving.

“He drove on to the pitch in an attempt to get the match abandoned,” Philip Tully, defending, told Liverpool crown court.

“He accepts he drove towards the referee and his comments and threats made to the referee when he got out the car together amount to the offence of affray.”

Rimmer, from Melling in Merseyside, lost it while playing for Lonsdale against Southport and District league rivals Harrington in February.

“He understands this is a serious matter. What happened was highly unpleasant for Mr Harkness,” said Tully.