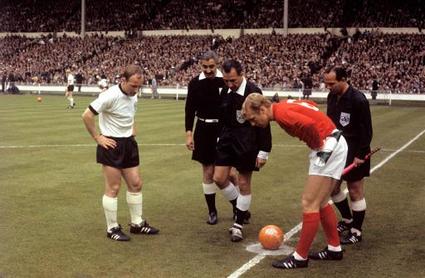 In a recent interview with Brazilian newspaper Folha de Sao Paulo Havelange (a Brazilian) claimed that referees assigned to Brazil’s games in the 1966 World Cup finals tried to harm Brazil and to favour hosts England and West Germany.
“Brail had virtually the same team (that won the World Cup) in 1962. Who was FIFA president? Sir Stanley Rous, an Englishman. Where was the Cup played? In England,” Havelange said.
“In my three games, against Portugal, Hungary and Bulgaria, there were three referees and six assistants. Seven were English and two were German. Why do you think that happened? To destroy my team. And they destroyed it. Pele left injured,” Havelange continued.

“What was the final? England vs Germany. Why were there only German and English referees in my games. The same happened in 1974, in Germany. Do you not think that is strange? And I ask you, did England ever become a champion again, or did it win anything? No. That’s where we are at,” Havelange concluded.
Interesting words, but does he have a point? We’ll probably never know if there was any anti-Brazil conspiracy in 1966, but you can’t really argue with the cold fact that England have never even reached a World Cup final on foreign shores.
For good measure, Havelange also claimed that the 1974 World Cup was fixed:
“The Netherlands had problems with oil, they had no oil because (the price) had risen a lot and they were riding bicycles. It was (then US secretary of state Henry) Kissinger who had gone there to settle that. He arrived at the stadium to watch Brazil-Netherlands, and (FIFA president) Stanley Rous designated (referee Kurt) Tschenscher, from Germany, who was 50 at the time.”
Murky stuff, but old Joao conveniently overlooks the fact that the main reason Brazil didn’t win the 1974 Cup because they had a crap team.
[FourFourTwo]