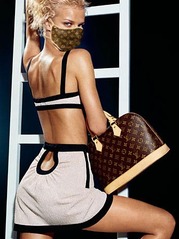 A Mexican player has been suspended from South America’s Copa Libertadores tournament, for pretending to cough and spit in an opponent’s face – gestures interpreted as threatening to spread swine flu.
Hector Reynoso, a defender for Chivas of Mexico, coughed several times in the face of Sebastian Penco, an Argentine playing for Chilean club Everton. Reynoso doesn’t have swine flu, Penco will be glad to know. Reynoso later apologised for his immature behaviour, but said he fully expected to be punished for his actions.
This is the first known case of “Swine Flu Simulation” in the history of football.
[Via Anorak]
Watch a clip of Reynoso’s piggy cough after the jump…

Nice that the commentators find it so amusing.