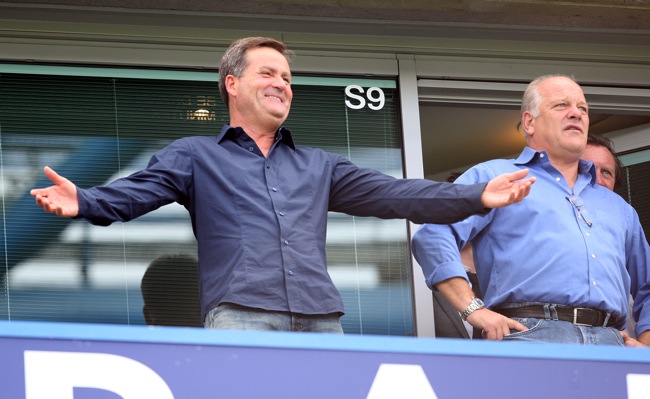 Keys: “Somebody better get down there and explain offside to her.”
Gray: “Can you believe that? A female linesman. Women don’t know the offside rule.”
Keys: “’Course they don’t. I can guarantee you there will be a big one today. Kenny [Dalglish] will go potty. This is not the first time, is it? Didn’t we have one before?”
Keys: “The game’s gone mad. Did you hear charming Karren Brady this morning complaining about sexism? Do me a favour love.”

What a joke that the repulsive Keys should engage in ugly sexist banter with his equally repulsive colleague towards a female assistant referee (Sian Massey, running the line for Wolves v Liverpool on Saturday), then take Brady to task for calling out sexists in the workplace. I suppose Keys’ brain is so overflowing with Sky Sports bullshit to realise the brilliant irony of his remarks. And Keys’ final flourish, “Do me a favour love”, reeks of all those sub-Alan Partridge, country club chauvinists who dress like Jeremy Clarkson and litter the outside lanes of the M25 in their BMWs, Mercs and ‘Lexi’. “Bloody women drivers.”

Or perhaps Keys knew he was being ironic. But I doubt he’s that self-aware.

Keys and Gray have apologised for their remarks – sort of. A spokesman for Sky Sports said: “The comments reported today are not acceptable.

“They were not made on air [that’s OK then!] but we have spoken to Richard and Andy and told them our views and they have apologised and expressed their regret.”

Not much of an apology – yeah, you can trust us, they said sorry. How about the pair come out and apologise in public to Massey?

And whilst I don’t believe, as some do, that Keys and Gray should be sacked for their private-made-public comments, from now on I will find it even more difficult to stomach them, knowing with a little more certainty what a pair of colossal pricks they are.

UPDATE: According to several sources, Keys and Gray have been suspended for one match (at least) and so won’t be involved in Sky Sports’ coverage of tonight’s Premier League game between Bolton and Chelsea. A smack on the botty, no more, but it’s better than nothing. More on this when we have it.

The audio (Via Anorak):

Keys and Gray get the giggles watching the 1998 Women’s FA Cup Final between Arsenal and Croydon: