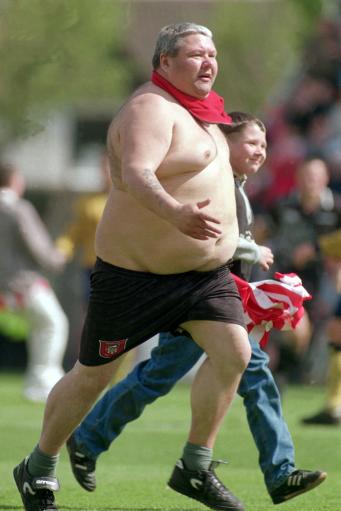 Training at Kettering Town this morning

New Kettering Town boss Mark Stimson has been shocked by the lack of fitness of his lardy squad since taking over at the struggling Blue Square Premier League side.

“Some players who’ve been here since pre-season lacked quality and massive fitness levels, it’s now beyond a joke,” bemoaned Stimson. “There’s probably four players I’d keep, if we want to do it my way, playing at a tempo, with the crowd jumping.”

“They’re not fit enough”, he continues. ” They’re at least three to six months away, especially when they haven’t got the appetite to get fit. There’s a lot of shifting to be done.”

“You have to be able to physically run. No disrespect, I could still play out there like some of them but I wouldn’t embarrass myself.”

Expect the club to ban the daily deliveries from Greggs the bakers.