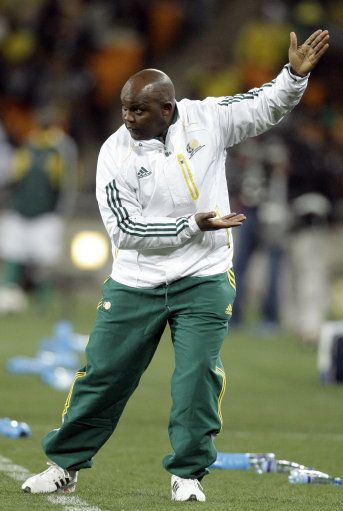 Poor old South Africa manager Pitso Mosimane made a right mess of his team’s final Africa Cup of Nations qualifier at the weekend.

The 47-year-old manager was convinced that his side needed only a draw against Sierra Leone in order to make it to the finals in Gabon and Equatorial Guinea, and his side duly obliged, playing out a goalless draw in Nelspruit.

His players and coaching staff even celebrated at the end, in the apparent knowledge that they had done what was needed. Indeed, the state run African Broadcasting Corporation even reported on the qualification. Except, they hadn’t qualified at all.

It quickly transpired that Mosimane (and everyone else, it seems) was a big eejit and had misunderstood the rules. In reality his side needed to win their remaining game against Sierra Leone, as despite ending up on level points with Niger, the head-to-head ruling meant that it was the central Africa side who progressed.

A frustrated Mosimane explained: “It’s very sad for South Africa because the country deserves to be in next year’s Nations Cup. I feel like I have failed,” (he feels like he has failed???)

“Do you think I would have left (striker) Majoro on the bench and put on a midfielder if I knew that we needed a goal? It doesn’t make sense.”, he said.

“Africa is a jungle, my friend,” he continued. “The European and South American formats are so much better because everything is running smoothly, but it’s very difficult to play in Africa.”