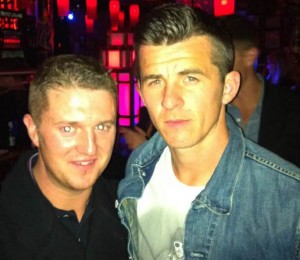 Barton with a gormless-looking Yaxley-Lennon

QPR’s Joey Barton has come out quickly and strongly to deny claims on the far-right English Defence League’s Facebook page that he has joined the organisation.

A photo of Barton alongside EDL head honcho Stephen Yaxley Lennon (see above) was posted on the EDL Support Group Facebook page, with the title “Joey Barton joins the EDL”.

However, the midfielder has refuted the EDL’s claims, in a statement released today which said:

“Queens Park Rangers Football Club and Joey Barton categorically deny any link between the midfielder and a far-right group who are claiming his support.

A photograph of Barton posing with a member of the group has been used to suggest the player is also a member.

Barton said: “As a Premier League footballer it is common to pose for photographs with people you do not know, as is the case here.

“I had no idea who the person was. I simply agreed to his request for a photograph. I have absolutely no connection with such a group.”