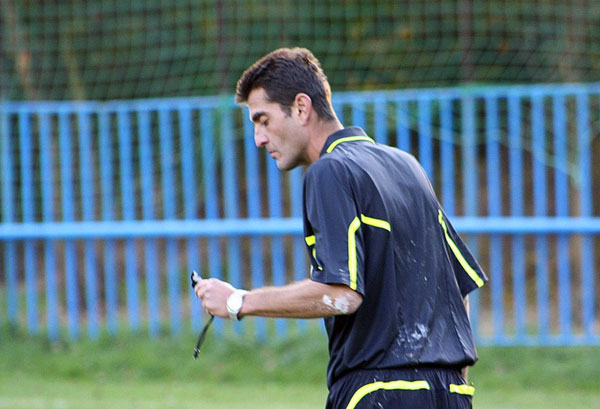 Indeed, Czech police were forced to breathalyse Fidra after he showed up to the regional match between Jestrabi Lhota and Tynec-nad-Labem ‘smelling like a brewery’ and ‘unable to stand up straight’ before duly sending off three players for no apparent reason and spending most of the match sprawling on the floor.

Apparently Fidra had been out celebrating his birthday before the game and had decided to ‘rock and roll’ it instead of calling in ‘sick, tired and emotional’ and sleeping off his drunky drunkies.

The match ended 1-1 with Jestrabi reduced to eight men and Tynec refusing to attack in protestation of the ridiculous dismissals. In the end, the match was annulled by the local football authority on the basis of fair play.

Meanwhile, Fidra is facing a 12-month suspension after his breathalyser test came back showing a 1.94% blood-alcohol level, or ‘Gazza by about noon’ in Layman’s terms.

Unfortunately we couldn’t find any video evidence despite doing two, count ’em, two whole Google searches, so here’s the closest we could get – a clip of a pissed-up ref, but not the pissed-up ref…